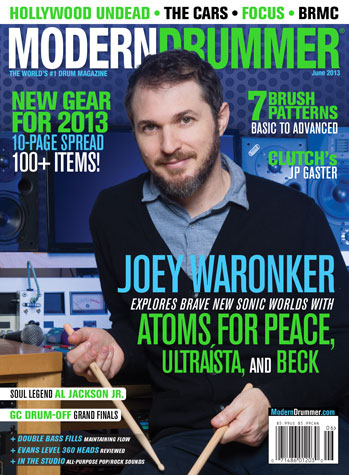 Turning Pro
This month we ask Pro Panelists Todd Sucherman, Dafnis Prieto, and Taku Hirano whether there was a particular moment when they realized they were a professional musician.

Up & Coming Justin Brown
His “thing” might be tough to de ne. But that hasn’t prevented him from becoming an important part of the bands of Christian McBride, Terence Blanchard, and other jazz luminaries.

Encore The Cars
The debut album by one of new wave’s leading lights percolates with pop-drumming brilliance.

Influences Al Jackson Jr.
Few musicians have helped de ne a musical style as much as he did, with hundreds of records released by the legendary soul-music label Stax.

Jean-Paul Gaster
The veteran heavy-rock band Clutch reconvened with the famed producer/engineer Machine for the new album Earth Rocker. MD was invited to stop by the studio and get a firsthand account of what went down.

AN EDITOR’S OVERVIEW
Listen for the Tone by Michael Dawson

Kit of the Month Pop Drumming