A DVD of Ringo and his All Starr’s performance at Nashville’s historic Ryman, is being released March 19, 2013.

Ringo Starr is a living legend whose contribution to the roots of rock and roll is immeasurable, not only as a Beatle, but also through his prolific and successful solo career. In gathering a new group of iconic rockers to play as the All Starr band each tour, every configuration offers a new and memorable moment where we get to experience songs we all know and love.

During the show at the Ryman, the All Starrs weren’t the only stars out that night. Joe Walsh makes a special guest appearance to play “Rocky Mountain Way” and is then joined for the encore, “With A Little Help From My Friends,” by his daughter Lucy and some of Nashville’s finest players such as Brendan Benson, Kix Brooks, Gary Burr, Vince Gil, Brad Paisley and former All Starr alums Felix Cavaliere and Richard Marx.

Ringo at the Ryman is a musical journey featuring great players playing great classic hit songs, all in all a momentous celebration, and a heck of a birthday party.

The All Starr Band: 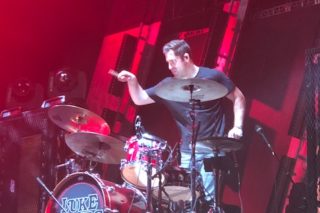 On The Beat with Jake Sommers of Luke Combs: Talks Touring, Fly Dates, and Networking

On the Beat With Jon Rotman of Eliot Lewis: Enjoying the Ride