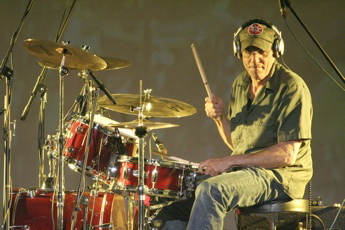 Giving back to his hometown, which was battered by Hurricane Sandy, Ricky Byrd and Rockers In Recovery have united to present an all-star concert aiding those affected by the superstorm. The concert will take place on Friday, January 25 at The Cutting Room in New York City at 8pm.

Two months have passed since Hurricane Sandy devastated the East Coast. Families are still recovering from this tragedy, which is why these members of the music community stepped up to aid the victims. 100% of the ticket sales, merchandise, and auction items will be donated to The Graybeards (a non-profit Rockaway Beach-based organization), West Hamilton Beach Volunteer Fire Department, and The Broad Channel Volunteer Fire Department.

“I live right in the middle of this disaster, but luckily, I have a house to repair,” states Byrd. “Unfortunately, there are many who no longer have a home, and are not being taken care of by insurance. I called some of my rock ‘n’ roll friends to help raise the roof and raise some money to help those who are less fortunate. We’re hoping these funds can help them with much needed repairs.”

Adds State Senator Joseph P. Addabbo, Jr.: “As the State Senator representing the Sandy affected areas of Howard Beach, Hamilton Beach, Broad Channel and the Rockaways, I know there are thousands of people who still need assistance months after the storm. I also know their needs will still be there months to come. I have heard so many heartbreaking stories that I will remember forever. That is why I am so grateful to Ricky Byrd and Rockers in Recovery and all the participants of the January 25th event. Your efforts will certainly help my constituents back on their feet from the destruction caused by Sandy.”

Rockers In Recovery is a Florida-based organization, founded by John Hollis, dedicated to addiction recovery through music, events, and festivals taking place within a clean and sober community.

The concert begins at 8pm. The Cutting Room is located at 44 East 32nd Street. Tickets are $50 for general admission. VIP meet-and-greet packages are also available for $150. To purchase tickets, please go here.