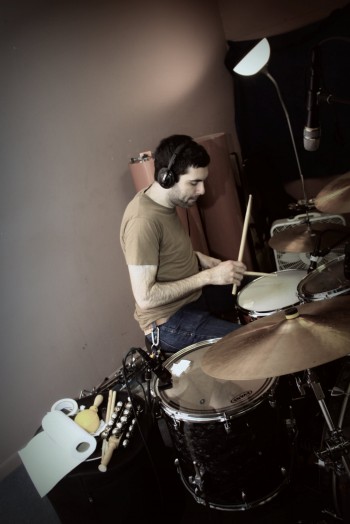 My name is Ian Kaplan, and I’m the drummer for Motel Beds. We’ve been playing together for about nine years, and we’ve just released our new album, Dumb Gold. I’m really excited about it, and I hope you go and check it out! It’s free to download at www.motelbeds.bandcamp.com.

I started officially playing drums around 1985 or 1986 when my family moved to Dale City, Virginia. My brother and I used to write and record songs, with him playing guitar and me beating on whatever I could find to eke out some type of drum sound. After dealing with me banging on pots and pans, walls, tables, countertops, and the hoods of cars, my parents finally had enough and bought my first drumkit from Veneman’s Music Emporium in Springfield, Virginia. It was a chrome Viking drumkit with Paiste 400 hi-hats, a Zildjian Scimitar crash/ride, and a Paiste 505 14″ China-type.

After moving around the world with my U.S. Air Force family, we settled in Dayton, Ohio. That’s where I met my best friends and bandmates and was lucky enough to see great local bands, like Brainiac and Guided By Voices, at bars and all-ages venues. As a teenager, these bands had a major impact on me and my playing, and a lot of the drummers I saw play, like Matt Espy (Dead Rider, Sarge, Atombombpocketknife), Matt Schulz (Holy F**k, Enon, Let’s Crash, Cigarhead), Jim MacPherson (Guided By Voices, the Breeders), and Tyler Trent (Brainiac), became dear friends whom I continue to look up to and respect. In fact, the first time I saw Braniac, I was so amazed by how good Tyler was that I bought their album Bonsai Superstar and spent an entire summer learning every song on it.

These drummers shaped the way I play today, but they weren’t my only influences. I was introduced to bebop by my middle school history teacher, Ernie Butler, who loaned me records like ’Round About Midnight, We Insist!, Time Further Out, and Byrd In Hand, which absolutely blew my thirteen-year-old mind and expanded my musical vocabulary beyond Led Zeppelin. That’s not to say that John Bonham isn’t a huge influence on my playing, but bebop was incredibly different and my interest and appetite for it became insatiable.

I never had much formal training on drums, so I developed some bad habits, of which I only recently became aware. I practice as much as my schedule allows and have been working out of my tattered copy of Jim Chapin’s Advanced Techniques for the Modern Drummer for many years. Recently, I bought John Reilly’s Master Drummer DVD, which is amazing. I highly recommend both to anyone looking for something new to practice.

I’ve been playing Ludwig drums for many years and consider them my brand of choice. Currently, I’m playing on a Psychedelic Red re-issue with a 24″ Paiste Giant Beat ride, a 20″ Paiste 2002 crash, and 14″ Paiste 2002 Sound Edge hi-hats. I use Vater Fusion wood-tip sticks.

I love playing as much as I possibly can, and while Motel Beds is my main band, I play in two other rock bands, Crusher and Goodbye. And I record drums for hip-hop artists Anger Bros. and King Baby Nuxhall. All consist of extremely talented musicians and close friends.

If I have any sage advice or wisdom to impart, it’s this: If you aren’t in a band already, join one. If you have stage fright or are too self-conscious about your playing, the only way to work through it is to get out of your comfort zone and play a show. Or five. Or 300.

The best part about being in a band is the friendships you make with people who share your determination to make music. I’ve learned more about how to play drums by writing and rehearsing with bands than I ever have from reading books or watching videos—and I’m a far better drummer for it.

I’d like to give my sincerest thanks to Modern Drummer for being interested in me, and to you, if you made it all the way to the end of this without yawning!