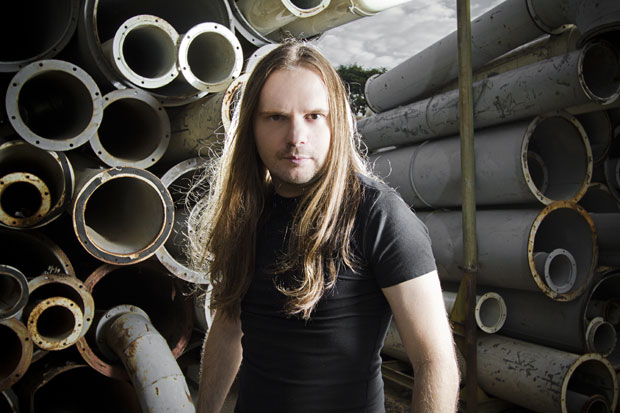 Hello dear fellow drummers, it’s an honor to be able to write for the Modern Drummer community. My name is Fabio Buitvidas, and I was born in the city of Sao Paulo. Despite being Brazilian, my musical roots are not samba or bossa nova, but rock and American funk from the ’70s and ’80s. Since I was three years old, I would sit beside my turntable listening to Elvis Presley, the Beatles, Earth Wind and Fire, and Kool and the Gang. Then I was introduced to bands such as Led Zeppelin, Black Sabbath, and Deep Purple, and I found the sound that spoke to me. The more I heard from those bands, the more interested I’d became in the rhythm section, and naturally I started searching for a way to find out what a drumkit was.

I started with wooden clothes hangers that I’d take from my mother’s closet and would literally destroy the sofa and pillows while I played to my records. In those days, it was very hard to even see a musical instrument because Brazil was a closed country and still in the military dictatorship regime. Everything was government-controlled, and it was a reality completely different than what was happening in the United States. A good instrument was a very rare thing to see. Imports were forbidden, and the ones manufactured in Brazil were low quality and too expensive, so I opted to learn how to play the acoustic and electric guitar so I could keep developing my musicality until I had the means to buy a drumkit.

In my first band, I played guitar with two other friends. One of them had gotten a small drumkit from his dad. Our rehearsals were terrible because I didn’t want to play my guitar. I’d always find a way to sit behind the drums, which certainly didn’t please my poor drummer friend. I eventually put my guitar aside, borrowed a hi-hat stand and a snare, and began playing a disfigured drumkit. It was very strange to play without a bass drum and have to hold the snare between my knees, but when you really love and want something, it doesn’t matter. After all, I was playing drums!

I finally managed to buy my first instrument and began to develop my skills playing in bands that demanded more and more from me. At a certain point, I started taking lessons because I had reached a limit of what I would be able to learn by myself. I spent a year taking classes, especially ones in theory, and that greatly helped me get to a point that wouldn’t have been possible without proper instruction.

The beginning of a musical journey is certainly quite difficult for everyone, be it in Brazil or a first-world country. But nowadays everything is much easier since instruments are accessible. The Internet has all kinds of material available as well, which helps musicians get more and more qualified.

In Brazil, I chose to play a genre of music (heavy metal) that wasn’t traditional, meaning not samba or bossa nova. The prejudice of the Brazilian musical community with metal musicians is huge, which is stupid—you don’t need to only play salsa or jazz to be a musician. I chose this genre because it speaks to me, and that’s what matters. I have the pleasure of playing today in two bands, Shadowside and Pastore, which are building a solid career step by step. With Shadowside, I toured the United States five times and Europe three times, the last one being with American legends W.A.S.P.

I had the opportunity to record and release three albums with Shadowside and two with Pastore. Both were greatly accepted, especially the latest releases, which hit the charts in Japan.

I use Paiste cymbals, Tama drums, Aquarian drumheads, and Pro-Mark drumsticks—all brands that fulfill all my needs regarding quality, tone, resistance, and reliability. Soon, Shadowside will be on the second leg of our Brazilian tour, where we visit the north and northeast parts of the country for the first time. In 2013, we are planning on touring America and Europe. I hope to see you at a show so we can talk about drums, music, and life.

For more information about visit www.shadowside.ws/en/.