Randy Ciarlante occupied the second drum chair throughout the Band’s decade-long resurgence in the 1990s, touring with the group and playing on the critically acclaimed albums Jericho, High on the Hog, and Jubilation. Ciarlante was an ideal counterpart to Levon Helm’s drumming and singing, and the interplay between them was wonderful. In 1999, while the Band was on another hiatus, Ciarlante got back in the saddle with ex-Band-mate Jim Weider, playing in various groups including the Honky Tonk Gurus, the Jim Weider Band, Project Percolator, and the Organiks. In 2011, following Helm’s remarkable career revival via his Midnight Rambles and Grammy-winning albums, Randy got the call to rejoin his fellow “brother of the drum” as part of the Levon Helm Band. Reunited, the pair came full circle, revitalized and playing to new heights—until Levon’s untimely passing on April 19, 2012. Now touring with his own CKS band, featuring keyboardist Bruce Katz (Delbert McClinton) and guitarist Scott Sharrard (Greg Allman Band), Ciarlante continues to be regarded as one of the finest roots players in the business.

MD: You officially came into the Band family in 1989. Although you had already played with Levon as well as other members of the Band in various configurations, what was it like knowing you were now part of a legendary group?

Randy: Well, I knew my bills were going to get paid. Plus, they were getting some good gigs! [laughs] Musically, it was amazing working with Levon, Rick [Danko], Garth [Hudson], Jimmy Weider, and Richard Bell. The original Band never had two drummers playing at the same time, so there was a learning curve whenever we did the two-kit thing. I had to try to find parts that would complement the classic drum arrangements that Levon had created, without getting in the way. The group wasn’t a jam band; it stuck to strict arrangements. Plus the solo sections were never elaborated on, so I ended up playing more percussion parts and patterns on the kit. I used different sound sources to embellish the tunes but still tried to complement the classic Levon beats. Long story short, I subdivided, added, and subtracted. It was a challenge for sure, and of course trying to help carry on the Band playbook was a pretty special time for me.

MD: With this comeback of sorts, the music came under a great deal of scrutiny. Did you feel any pressure at the time, especially from original Band purists?

Randy: You’re never going to please everybody, so my barometer was the guys I was working with. We were doing a lot of laughing, and we had some really good moments playing the shows. We played some well-received concerts in that ten-year span. Some of the purists may have missed the good old days, but I think a good amount of them were happy to see the original members playing their classic hits again, and hopefully a few of the newer things we created also stuck in their playlist.

MD: Let’s take Jericho as a point of reference: It was a landmark album, and it netted some new classics. Tell us about the vibe at the time, and could you describe a typical session from that album?

Randy: Most of that album was cut at Levon’s barn, so we pretty much camped out there. Some basic tracks were cut at Bearsville Studio and at Bear Tracks, but the majority was done at Levon’s. We rented gear and set up a studio. It was no doubt a grass-roots production. Once the word got out that the boys were making an album, they received boxes of cassettes and CDs from outside writers, and we spent months sorting through some really good material. We also spent many days writing and arranging our own tunes. And we had different artists come to the barn to write, jam, and record. The vibe was fantastic, and the longer we worked at it, the more comfortable the process became. We approached the other albums, High on the Hog and Jubilation, a little differently, but guys were starting to get sick by then.

MD: Songs like “Remedy,” “Atlantic City,” and “Amazon” were fresh and exciting. In particular, during that recording, how did you and Levon go about fleshing out your rhythmic parts?

Randy: “Remedy” was the first track we felt good about during the barn sessions. Jimmy Weider and Colin Linden wrote the tune, and all we had to do was figure out how to play it. We threw around some ideas and finally came up with the end result. We tracked it with two drumkits, and the parts got mixed together. Levon was using Hot Rods. They had and still do have a unique sound in that room. I played with sticks so we’d have that sound source to work with in the mix.

Levon made that track come alive, and I was riding shotgun. If you’re going to create a Band track, he’s the main rhythm ingredient. I was a pinch of salt here and a shot of pepper there. I only sang background vocals on “Atlantic City”; the boys had cut the basics at Bear Tracks before we started the barn sessions. “Amazon” was a big live session at the barn; I was on a hybrid kit playing mostly percussion parts. There are still some fun outtakes floating around from those sessions. We actually spent more time in preproduction. Once that settled in, we ran the tape. MD: Aside from being the perfect support player, you brought some things to the table, such as your embracing of rhythms outside the realm of traditional Americana—Afro-Caribbean, Latin, world beat, etc. Meaning, you kept the core of the Band’s sound intact but weren’t afraid to venture into uncharted waters.

Randy: I think every musician in that group blended different styles into their playing; it’s what makes them unique. If you go back into the Band archives, you’ll find a plethora of musical influences that incorporate odd measures, world music, blues, jazz, funk, rock, folk, country, gospel. Did I leave any labels out? To me, the ability to blend all of it is Americana music.

MD: Going from regional touring to the national spotlight, playing large arenas, theaters, television shows, and such, was that an adjustment not just mentally but physically?

Randy: The touring always took about a week to get in show shape. After that first five to seven days, the Band was burning on all cylinders. Then we’d talk through the arrangements on the bus—fix what we didn’t like about the show and build from there. The TV shows are always tougher because you’re working without a net. But if they were scheduled at the right time, they usually clicked. We also did a lot of in-studio radio broadcasts, mostly acoustic sets. They were fun, and we had to focus on vocals quite a bit. I learned a lot about singing from Levon and Rick, both in the studio and live.

MD: The average person is under the impression that when an artist like you has been part of something “famous,” the notoriety you’ve gained sets you for life. How difficult was it to come out of the Band and reestablish yourself in the music marketplace?

Randy: My experience with the Band was a gift. I never had the illusion that I was anything more than a sideman in that group. I happened to be in the right place at the right time. I worked hard, and it took me on a pretty good ride. I’m very fortunate to still be playing with some very good musicians who inspire me to keep growing as a player. That’s the same mindset I had when the Band gig fell in my lap, so nothing has changed. I’m still paying my bills.

MD: As a player, you never seem to place limitations on where and how the drums can be utilized. Do you think that’s been the secret of your success?

Randy: I’d like to think that the success I’ve had in this business has to do with my attitude toward serving the music. Drums are the world’s oldest musical instrument, so we have seniority over any limitation. Every song has a pulse, so why not dress it up with a good beat.

MD: You and Randy Ciarlante go way back. In your opinion, what were the qualities that made him so integral to the Band?

Butch: Randy, like Levon, is a blue-collar man. Working-class in his neighborhood meant on the back of the blacktop truck at age twelve at 4:30 in the morning; his old man was getting him up for work. Levon started in the Delta, working the cotton fields on the tractor before school. Working-class, regardless of geographical differences, is working-class. A team player! That is Randy, and that is what the Band needed. Plus he’s such a humble cat, never in the spotlight, always a worker bee. His musical knowledge is beyond the beyond, and that’s the Band’s roots too.

MD: The business of making music on a national level is a complex one, and people have no idea of the rigors of the road. As the Band’s road manager, you were in charge of many facets of their career. What do you feel was the hardest challenge of holding intact multiple creative personalities and maintaining that cosmic edge on stage every night?

Butch: I really had to wear many hats with the Band’s musicians—doctor, lawyer, policeman, shrink—and every day had different challenges. Sometimes it was geographical. In the South, Levon had the most needs. In Canada or Europe, usually it was Garth or Rick. The biggest lesson I learned that kept me sane on the road was to let it just happen. They knew what they were doing, and I had to trust their professionalism and let it ride. They rarely let me down.

MD: In your mind, what was the essence of why Randy and Levon worked so well together?

Butch: R-E-S-P-E-C-T! They respected each other’s musical abilities, and having played together for so long in so many different incarnations, they always knew they had each other’s back. “Guarding their gun sides,” as Helm liked to call it. They always worked without a net, and Levon trusted Randy.

MD: From 1990 to 2004 you were in charge of some of the greatest musicians on the planet. Although you have personally seen more career moments than most people, what do you feel is the key ingredient that defines greatness in an artist?

Butch: Greatness as defined by the Band is humility in the face of fame. Whether it was a sold-out Carnegie Hall, in front of 60,000 people at the Grateful Dead’s last shows at Soldier Field, or with eleven people at the Levon & the Barn Burners gigs, they were the same people—musicians, working their craft to give working people a night away from their troubles and get ’em dancing. That was the greatness of the Band.
Photo by George Lembesis.

Fifteen DVDs Every Drummer Should Own 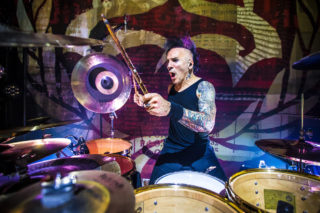 On The Beat with Roy Mayorga of Stone Sour: Talks New Album and Gear