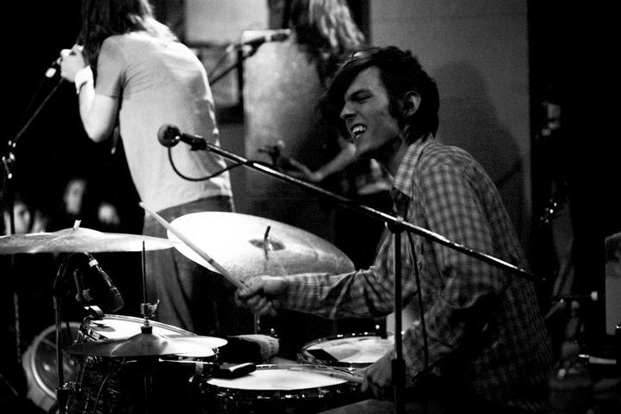 Friend and drum mentor Ray Rizzo got offered the gig with a killer band that plays 150 to 200 shows a year. He recommended me instead. Dream come true? You bet! A learning experience in ways I didn’t expect? Even more so.

The demands of playing genres outside of what you usually play can be stimulating in ways far beyond learning new licks. Different musical settings require wholly different kinds of musical awareness, exposing parts of your playing that might get overlooked otherwise. It’s the musical equivalent of cross training.

As someone who’s spent the past few years playing mostly in the jazz world, the couple of months I’ve spent with These United States have been incredibly growth-filled. Sure, I’ve listened to Americana, indie rock, and alt-country for years, but actually playing TUS’s music six nights a week has given me some fresh perspectives.

For example, one of our tunes, “Honor Amongst Thieves,” seems pretty simple on the outside: It’s got a country two-beat verse with a Bo Diddley groove in the chorus and bridge. It’s a narrative song with a straightforward arrangement, and our front man Jesse’s lyrics drive the tune. Though it felt great on stage at first, listening to a recorded gig gave me pause. Jesse’s rapid-fire vocals were edging up on the top of the beat, which fit perfectly with the song’s energy. However, in tuning into him, I followed his rhythmic delivery so closely that his “on top of the beat” became my “on the beat.” My snare drum train beat got a bit too edgy, Jesse’s vocal timing was nullified, and while the band didn’t speed up (thanks, Anna and Justin!), the groove just wasn’t settling in how I felt it could.

The next evening, though I still listened to Jesse, I focused on keeping my bass drum in line with what Anna, our bassist, was playing, and tried pulling the snare drum way behind the beat. The tune’s energy shifted subtly, the groove had a fatter, looser pulse that meshed with its honky-tonk vibe, and Jesse had more space to phrase his vocals on or ahead of the beat, as the moment demanded. And while I might have been the band member to consciously notice all this stuff, I’m the drummer—that’s my job!

Paired with a great conversation I had with Ray that made the light bulb flicker for a few days, that experience opened me up to new questions. Drummers are told to listen and be supportive, but what are some ways we can become more aware of what we’re hearing and how it’s affecting our own playing? Are there times when we need the discipline to listen, but to be supportive of our bandmates by not getting pulled into what they’re doing? I’m spending more time trying to home in on specific things I hear each player doing with phrasing, articulation, note choice, and tone, and how each of those makes me feel, physically and emotionally.

For “Honor” I needed to vibe off of Jesse’s vocal energy and dynamics to help contour the song, but simultaneously maintain the discipline to keep my rhythmic awareness locked in with the bass and rhythm guitars. Stuff like this is probably obvious to a lot of players and is something I’d thought about, but playing a country two-beat in the right context opened my ears to it further and more quickly than playing the same old same old would have. And though I learned it on a rock gig, it’s totally applicable to any style of music I play! I can really see how strengthening these awarenesses further will help me draw from a passionate performance by a bandmate, be it an alt-country vocal or an avant-garde sax solo, while maintaining just a little bit more control over my own grooves.

Good thing I’ve got a couple hundred dates a year with these cats to work on it.

To read more about Aaron Latos and These United States, go to aaronlatos.com  or theseunitedstates.net.