Red Hot Chili Peppers drummer Chad Smith has released a new app for Apple devices and Android, and he’ll be conducting a live Twitter Q&A session before the Chili Peppers’ show at the Prudential Center in Newark, New Jersey, this Saturday, May 5.

Fans who download the free app, which is sponsored by Sabian Cymbals, will be able to keep up with all of Chad’s activities, listen to tracks from his recording projects, stay current with the drummers Chad is following, interact with his online fan community, view performance and clinic videos, and follow his blog and Twitter feed.

Unique to the app is a “Drummer GPS” function that allows followers to learn about Chad’s favorite drummers. “For me that’s the coolest part of the app,” Chad recently told Modern Drummer. “You get to find drummers that I’m into, even some that you’ve never heard of before. You’ll be able to read their bio and maybe watch some video, and you’ll find out when and where they’re playing. The app’s not just ‘Hey, look at me!’ It’s about drummers connecting with other drummers. I love that.

“I want to keep it fresh, with new stuff every month,” Chad adds. “I’ll answer questions, and there will be giveaways and other things that will encourage fans to use it regularly. Some bands’ sites are like, ‘Here’s our new album, and here’s where you can buy our T-shirt,’ and that’s it. But I wanted this to be something that you’d want to keep coming back to.”

Smith will also be conducting a Twitter Q&A session before the Chili Peppers’ gig at the Prudential Center in Newark, New Jersey, this Saturday, May 5. Modern Drummer is encouraging fans to go to our Facebook page and post a question you’d like to ask Chad, and he’ll answer as many of them as possible. In addition, you can hashtag your tweet, #AskChadSmith. You’ll have the chance to win a pair of signed drumsticks as well. For more, follow Chad on Twitter.

On the Beat With Pamela Lynn-Seraphine: Mental Fitness Through Neurodrumming Therapeutics 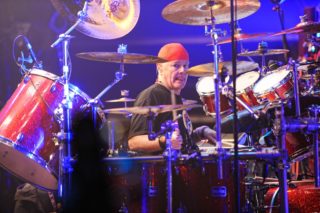 On The Beat with Nigel Glockler of Saxon: Talks Gear and Influences