The sun sets over El Paso, and over Juarez as well—which is apparently the murder capital of the world. So I regretfully agree to enter round two in my search for decent Mexican food in El Paso. 0 for 2 this year. You would think being a stone’s throw away from the country would help. Back in 2005 I crossed the border and had dinner with some crew on a day off, but it seems that times have changed. Or at least I’m more informed about imminent danger these days.

And then you wake up in Tucson.

So when a good friend asks you to recall your time at SXSW in Austin, TX, this year, which was less than a week prior, it seems just as likely that you’d remember what color dress your fourth-grade teacher was wearing on the first day of school. I’m pretty sure I remember eating some BBQ, meeting my soul mate, seeing Hello Goodbye play until 2 a.m. and ending their set in a naked freak out dance party, jumping off a rock ledge into the river, playing a show with so many technical issues that we only ended up playing four acoustic songs (two of which still didn’t have piano, and during the last one we had the PA turned off on us), stumbling upon Miike Snow’s disco set in a backyard somewhere, and possibly most important, scoring tickets to one of Refused’s NY shows.

And then you wake up in Southern California to grey skies. You win some, you lose some.

But back in Austin, despite the insane schedule, despite the mobs of local drunks, industry nerds, fans, and dirty musicians (which all seem to blend into a video-game reality consisting of three different zombies scrolling past in an endless loop), and despite the aural onslaught of your four least-favorite bands playing all at the same time, echoing off the brick fronts of 6th St., when you have a good show at SXSW, its REAL good. 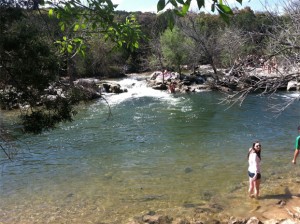 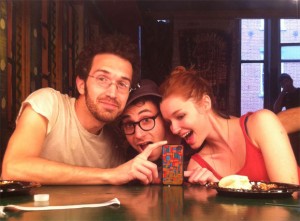 And then you wake up in L.A., and somehow you managed to coordinate your one day in L.A. with L.A.’s one day of rain. So you wait for your friend to pick you up and take you to an audition for the dating game show that she works on. Weird, right? I know…when does it rain in L.A.?

But like I said, when SXSW is good, it’s great. It doesn’t hurt when you show up a bit early to load in at Stubb’s BBQ and Santigold is finishing up her set for Spin magazine’s afternoon showcase. Especially when you can claim things like, “Yo, that’s my Philly girl!” even though you’ve never bumped into her in Fishtown. After a week of SXSW, after a few days of production nightmares and technical difficulties, you are beyond ready to play a show. And not an awkward private party, not a room mostly filled with stuffy jaded industry types, but a proper show. Where the front row is filled with the kids that showed up earlier than you did. Where the crowd is about to explode from excitement. Where they know every single word, they know the old record, they know what bands you used to be in, they know the demos and unreleased songs. Hell, at this point, you might just be more excited for this show than everyone in the crowd combined. 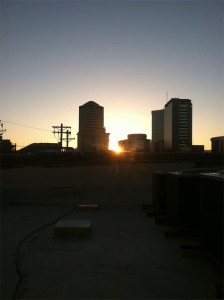 And fortunately for us, the last show we played at SXSW, our last night in town, at Stubb’s in front of the biggest crowd that week, it happened. Everything came together on stage and we were firing on all cylinders. Every time I turned to my left, there was Emily with her acoustic and her smile mimicking mine because she knew I was having as good a time as she was…or Jack, abusing his old Gibson 335 with his bombastic style that I’ve yet to see anyone come even remotely close to. To my right was Nattie on bass, who follows my accents on those big crashes and always makes eye contact with a smile when we’re locked in. (FYI, if you don’t follow me on Twitter then it’s worth mentioning that I am basically in love with this kid. He’s my rhythm section man-crush.). Even Andrew, in the control center of his three keyboards, who changes patches from synth to piano then picks up his flugelhorn without missing a beat, looks back to follow my hi-hat to make sure he’s locked in. And Nate, with every eye on him, and every set of lungs trying to keep up, when he turns around to shoot me a sly smile and quick wink, I know we’re killing it.

It may sound arrogant, but that’s what happened. All sorts of people walked into the venue that night off Red River St., but during that short set, they were all fans, singing and moving, sweating and smiling, not concerned about the day before or the night ahead. They fell in love. With a sound, with a feeling, with something. And we did too. We do it every night. I think that’s what keeps us going when the days get long, or everyone gets sick, or you just want a minute with your dog or your bed or something that feels like home.

And then the clouds clear and a bit of sun starts to peak out just before it sets in L.A. So you make plans to bowl with old friends and new friends because it’s Sunday night and you have the day off. The funny thing about a day off is that while it’s needed for rest and catching up on laundry or bills or any of those other things that seem to slip through the cracks the rest of the week, you end up really missing those days on. It’s tomorrow night’s show that makes me feel like the luckiest person alive.  It’s what makes me tell people that I’m living on borrowed time, that I’m well aware of how few people get to do this for as long as I have, and that I don’t plan on taking it for granted for even a second. Tomorrow is a new day, a new city, and a new show. So bring on the work….

And for those of you interested…I’m using an amazing C&C kit. It’s 12/16/22 with a matching 5.5×14 snare, all made with C&C’s new Gladstone shells. I’ve always respected Bill Cardwell’s traditional approach to building custom drums, and now that he’s using his own shells, it’s a force to be reckoned with. Typically I don’t really like the tonal disparity between a 12″ rack and a 16″ floor, but I have just a little tape on the bottom of the 16″ to tighten it up, and with the 12″” sounding a little fatter than most, its a perfect match. The kick and snare are some of the tightest/fattest drums relative to their size that I’ve ever played.

I’m also touring with a great set of Istanbul Agops—a 22″ Azure ride with plenty of wash when I need to lay into it, a 19″ Traditional Dark crash that cuts just enough, and a mixed pair of 14″ hats (traditional light bottom, and a Mel Lewis top) that slosh when open and chick when closed, and of course, my trusty Vic Firth 5b wood tip American classics.

I’ve recently incorporated a Roland SPD-S pad for some of the electronic samples that I need to play live (kick/snare tones in “We are Young,” 808 in “At Least I’m Not as Sad (As I Used to Be),” and a big reverb snare hit in “Carry On”), as well as a JoeCo BlackBox recorder for some of the strings/horns/loops. (We are currently just running three stereo pairs plus a click, though it can support up to twenty-four channels of 24-bit wavs.) I think my four-piece kit ends up being nineteen inputs in all.