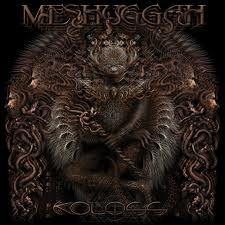 It’s time to take the usual bank of adjectives used to describe Meshuggah—words like brutal, dizzying, and relentless—and add…laid-back? First let’s be clear that Koloss, the Swedish metallers’ follow-up to the ultra-successful 2008 offering ObZen, includes an undiminished sense of power and complexity. It’s just that many of the tracks feature a bounce and a settled-in feel that show the band breathing together in a way that feels new. TOMAS HAAKE, a pioneer in constructing head-scratching drum parts that seem to exist in two (or more) rhythmic spheres simultaneously, strips down some of his patterns here, while maintaining his usual swashbuckling chopping of subdivisions. “Do Not Look Down” practically grooves, and it features an old-school-shredster guitar solo by Fredrik Thordendal. And the heavy, hypnotic ride-outs at the end of songs like “Marrow” and “Break Those Bones Whose Sinews Gave It Motion” are positively majestic and play into the album’s measured vibe. On the more frenetic end of the spectrum is “The Demon’s Name Is Surveillance,” which, with Haake’s unstoppable triplet-feel kicks, is almost a sequel to ObZen’s double bass marathon “Bleed.” And “Swarm” is to be taken literally, especially when Haake’s snare starts swatting at the menacing guitars buzzing around it. (Nuclear Blast)