Want to be a better drummer? Try taking these words out of your vocabulary: Always. Only. All. Never.

Despite the prevalence of educational books, DVDs, and online lessons, most drumming information is still passed down the old-fashioned way: from one player to another, while shooting the breeze at the drum shop. A lot of what we hear, we take at face value, and we repeat these drumming “absolutes” to the next guy as gospel. Sometimes, though, it’s worth questioning the wisdom passed down through the ages….

1. A great band necessarily has a “great” drummer.

If “great” means serving the music, regardless of how subtle or crazed the drums might have to be to do that, then this is correct. If it means always playing mindblowing stuff even when some space is called for—or offering up supremely tasteful, metronomic accuracy even when more blood and guts are required—then it’s not.

Good music is about balance, and if one element draws too much attention away from the power of the whole, the music suffers. Imagine the late Keith Moon playing in any band other than the Who. His over-the-top style would probably sound…well…way over the top. But because his bandmates had equally wild musical personalities, the music worked. And as genius as Kenney Jones is—and his work in the Faces makes it clear that he’s a monster—the thing that people inevitably missed when Kenney replaced Moony was the wild abandon. (In fairness to Kenney, it should be noted that Who songwriter Pete Townshend was already writing for a less “messy” Who sound when Moony passed away.)

Debates go on today about things like, Who’s the better drummer, Keith Moon or John Bonham, Neil Peart or Phil Collins…? The only thing we know for sure is that if those certifiable drumming gods hadn’t found their respective bands—or those bands hadn’t found them—rock ’n’ roll would be a far less fun thing to be a fan of.

Also, don’t get into the habit of listening to music only as a drummer, or even as a musician. There are plenty of amazing songs and albums that were recorded by players who, if heard alone playing a groove or a solo, wouldn’t turn many peoples’ heads. Often the most magical performances are made by solid but unspectacular players who nonetheless hit upon some wonderful common sound with their bandmates. So next time you’re listening to music, try not to dissect it. Just feel it. If the music touches you, who cares about maxims like “A great band always has a great drummer” or other attempts to define this gloriously indefinable thing we call music? We invent these things to make ourselves—not the music—feel better.

Honor thy mistakes with repetition—I think the legendary Brian Eno said that. If it’s the right mistake, and you react quickly enough to it and then either repeat it artfully or create some cool variation of it, you could end up being called a drumming genius.

Plus, if you obsess over playing everything just right, you’ll likely have trouble relaxing enough to groove well. And you’ll have trouble opening yourself up to the unknown, which is something great artists continuously strive for.

So you blew that fill—what are they gonna do, arrest you? Lighten up and have some fun.

About fifteen, twenty years ago, the drum industry fell all over itself trying to create mechanisms that allow toms to resonate as freely as possible. The trend continues today, with some manufacturers shackling their otherwise gorgeous kits with hideous-looking suspension mounts in response to this “need.”

It seems to me that a blind ambition toward more resonance represents a case of art following technology, rather than the other way around. Yes, a less choked drum can often mean a better-sounding drum, and the resultant longer sustain of a note can be a desired effect. The opposites are obviously sometimes true as well, given the existence of things like Moongel and electronic gates.

And check this out: Freely resonating toms can actually make it harder for you to be heard. Controlled drum sounds can be more easily mixed, manipulated, and amplified, allowing them to be better heard without obliterating the other instruments.

While it’s cool that mechanical “improvements” like suspension mounts give us more options, be careful to separate the marketing from the motivation. In this day and age of overly programmed music, it’s always wise to question the importance of any piece of technology, no matter how seemingly benign. 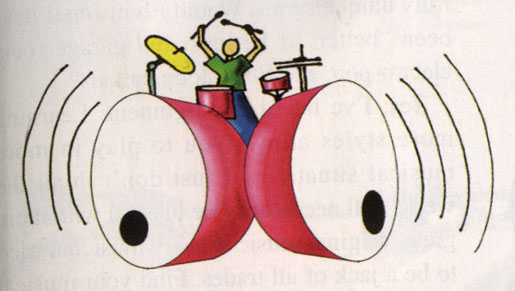 Though larger drums move more air, smaller drums have higher pitches, which can cut through the music more easily. If you want a subsonic boom so bad that you’re willing to schlep a 26″ bass drum around, all the power to you. Just know that you’re not necessarily going to rock the house that much more with it.

If the music calls for it, a “vertical” feel might be the most appropriate thing. Some new wave and electronic music, for instance, would sound silly with slinky grooves. Creating intentionally mechanical beats to highlight certain lyrical content can be the perfect choice. Beware of people who always slag songs or bands for sounding too stiff. If the drummer is furthering the artistic cause—whether or not it’s your taste—give him or her the benefit of the doubt.

6. Brushes, dowels, and the like will allow you to play more quietly.

Not always. What these alternative strikers do do well is offer different impact sounds, giving you another way to differentiate song A from song B. But if you’re just trying to play the same music at a quieter volume, you’re better off learning to play with more control, perhaps with thinner sticks.

If it did, you wouldn’t want to hear it. As Einstein said, time is relative, which in musical terms means you should control it but not take the life out of it.

Imagine a breathtaking view of trees on a distant hill in, say, late October. The lovely curve of the skyline, the radiant yellow glow of the leaves. Look a little closer, and you’ll notice that all the treetops don’t perfectly swoop into each other, and that lots of those leaves are brown and crumbly. And look at that tree stump over there. The rings are hardly perfect concentric circles. There’s some squiggle there, right?

Music isn’t meant to be listened to with the dispassion of a scientist studying microorganisms. It’s made to dance to, to party to, to make out to, to sing along to as we drive down the highway. Perfection is often the enemy of emotion. Take a step back when you judge your own playing. Yeah, maybe when you hear your part soloed back to you in the control room, you want to cringe. Now bring up the bass and guitars. Are heads bobbing? Then you did good.

8. Fusion and progressive drumming are for over-educated drum snobs.

Nonsense. By denying rhythmic sophistication, you’re severely limiting the possibilities of making effective music. The “I’m more punk than you” game is for children. The flip side of this is… 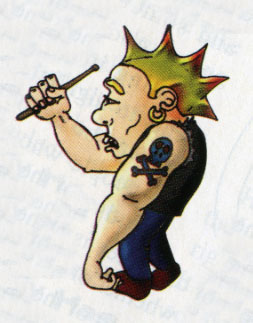 9. Punk drumming is for talentless Neanderthals.

Sometimes simplicity is profound. Focusing on one basic part and playing it with passion is often exactly what a track needs. And, you know, there can be a certain charm in amateurism. (Though a little of that goes a long way.)

Every musician has certain grooves and tempos that feel best to play. But don’t assume that the particular song you’re playing works best at your favorite tempo or groove. Sometimes to make a song happen, you have to play a part that initially feels awkward. The proof is in the pudding. Listen back to a recording before you make a final judgment. And listen respectfully to the opinions of your bandmates. Not all singers are morons.

11. Drum parts should always be clear in the mix.

Untrue. Listen to Harry Nilsson’s “Me and My Arrow.” In places, it’s hard to actually hear what’s going on in the drum part. But it’s blatantly clear how wonderful the performance is. Every song is unique; sometimes a little mystery in a drum part adds just the right amount of rhythmic power to the song.

12. You should work toward being proficient at as many different styles as possible.

Maybe, maybe not. If everyone did it, then we’d likely have fewer players with truly unique styles. Would Elvin Jones have been “better” if he mastered garage rock, electro-pop, and Elton John ballads? Maybe. Maybe not.

Yes, learning new drum styles allows you to play in more situations, and we can never have enough tools in our belt. But not every drummer is cut out to play different styles convincingly, or even absorb them effectively, no matter how much they practice. Some musicians are destined to cut their own path, and they shouldn’t be shackled by the “wisdom” of academia when their time could be better spent following their own muse.

Would the world necessarily be blessed with more great, original music if every musician tried to be a jack-of-all-trades? (Remember the other half of that saying: “master of none.”) If you’re into exploring different styles, by all means do it. But if working out of method books or listening to samba is just not your thing, maybe you should focus on finding your musical voice, developing it, and playing with people who “get” you. History might just remember you more fondly.

Just remember, if you’re avoiding certain types of rhythms out of laziness or closed-mindedness, you’re the only one losing out. The point is, take the time to discover who you want to be as a musician, and follow the path that gets you there, regardless of how well traveled—or un-traveled—it is.