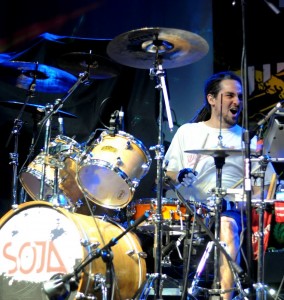 Hello, MD readers! If you had told me at age fifteen that I would grow up to be a professional drummer, I would have thought you were crazy. Playing drums seemed like the last thing I would be able to do. Fast-forward fifteen years, and who would have thought that some kids from Arlington, Virginia, would play stadiums for over 50,000 people.

In high school some of my friends started a reggae band. At their garage “rehearsals,” I’d be hanging out and just bang on some old bongos, mostly because I couldn’t play anything else. I was terrible. Luckily, they broke up, and the guitar player, bass player, and I started our own reggae band. They decided that I would be the drummer.

I was still terrible. But I picked it up as I went along. It’s crazy, not many people other than Jamaicans learn to play drums on reggae, but that’s how I started. I remember people telling me that it’s hard to learn since the accents are on the 2 and the 4 instead of an emphasis on 1 and 3, like most other styles.

In the beginning I was heavily influenced by Carlton Barrett with Bob Marley and the Wailers. But the more I listened to other kinds of music, the more I became inspired by everyone from Questlove of the Roots to Danny Carey of Tool. I can’t believe where I am today. I sometimes just stop and think, “Man, is this for real”? We’ve sold over 150,000 albums and played all over the world. We paid our dues and until now, and we’ve done it all by ourselves. Our latest album, Strength to Survive, was released on ATO Records this January 31 and was produced by John Alagia (Dave Matthews, John Mayer, O.A.R.). 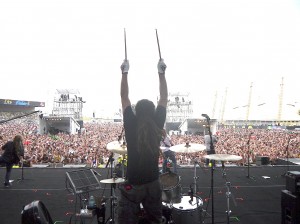 Who knows where we’re headed from here, but all I can say is that I am very fortunate and wouldn’t be anywhere without you, the fans.

For more on Ryan Berty and SOJA, go to sojamusic.com/band.