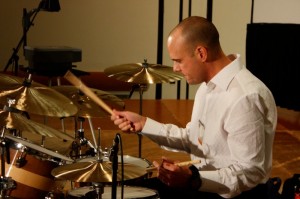 Focus on the Hi-Hat

Before small groups reigned supreme and the ride cymbal became king, the beacon in jazz timekeeping was the hi-hat. Jo Jones with Count Basie and Ray McKinley with Glenn Miller were masters of the hi-hat. Both players could swing an entire arrangement simply by manipulating the open and closed sounds of the cymbals.

The roaring ’20s saw the invention of the low boy. As its name implies, this device stood approximately 12″ high. When pressed down with the foot, the mechanism closed, bringing the two cymbals together. Early low-boy players include Warren “Baby” Dodds, Paul Barbarin, Ben Pollack, and Stan King.

The low boy was elevated twice during its development. It eventually grew to 20″, where it was known as the sock cymbal, before becoming the full-size hi-hat that allowed swing drummers like Chick Webb, Gene Krupa, Ray McKinley, and Jo Jones to play time on the cymbals with their sticks.

A key to creating a complete, swinging hi-hat sound is for the top and bottom cymbals to remain touching. Try resting your foot on the pedal and lifting your toes slightly. This creates a small opening between the cymbals, which is enough to make an open sound. If you lift your toes a little more, the sound will be louder.

Here’s a brief tutorial to help get you swinging on the hi-hat.

For transcriptions and additional insight into the hi-hat, check out the complete article in the March 2012 issue of Modern Drummer.