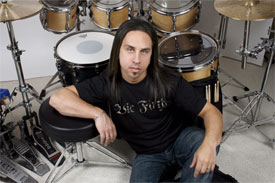 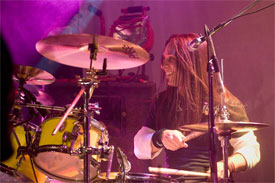 [MDEdTop]Jason Gianni is a full-time faculty member at Drummers Collective in New York City. He co-authored The Drummer’s Bible with Mick Berry, which is a guide to mastering various drumming styles, and he has recorded television and radio commercials for Toyota, Discover, McDonald’s, Showtime, and the Oakland Athletics.

Gianni also played on the soundtrack to the hit show Hannah Montana on the Disney Channel and on the opening theme for the popular Nickelodeon children’s cartoon Spongebob Squarepants. Gianni currently works with Days Before Tomorrow, a melodic progressive rock band, and with members of the Trans-Siberian Orchestra in a project entitled Daredevil Squadron.

Here is the first part of Gianni’s series on multi-pedal ostinato studies.