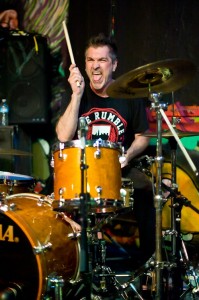 Greetings, earthlings and fellow MD time travelers. I’m currently the drummer for Boston hardcore legends DYS. This summer I was in the process of relocating to Phoenix, Arizona, when I got the call. I spent a great deal of time in Boston (1986-96) while in college and also worked with singer Dave Smalley (Dag Nasty, All, Down by Law) and bassist Jonathan Anastas (DYS, Slapshot) in another project a few years back. These guys are Bean Town through and through. We’re in the process of releasing a series of monthly digital singles, which we launched last November. All music and videos will be available at iTunes. The December single, “Sound of Our Town,” which features Mighty Mighty BossTones singer Dickie Barrett, is an ode to all things Boston. A video for the first single, “Wildcard,” has been released as well. Look for DYS doing more shows in 2012. Already on the books is the Groezrock festival in Belgium with Rancid and many others in the spring 2012.

On the session front, I can be found on the latest release from Anna Domino and Snake Farm, My Halo at Half-Light. I had a great time working on this record. It was tracked at the Hobby Shop in Los Angeles and produced by old pal from back in the PM5K days Mudrock (Godsmack, PM5K, Avenged Sevenfold—he also tracked and produced the latest tracks by DYS as well). It’s a groovy take on some traditional folk songs, very cool stuff. I also got a chance to work with a fave bass player of mine, Sebastian Steinberg (Soul Coughing, Jon Brion). Good times! Lastly, I have been working with Takelessons.com http://Takelessons.com, teaching drums, guitar, and band coaching in the Phoenix area. Anyone interested in studying with me can contact them to check my availability or email me directly at apahanishjr@yahoo.com.

Before I go I would like to thank Modern Drummer, my students, all the fans, my girl Heather, and all the cats that provide me with the best gear on the planet: E-Pad, Vater percussion, Zildjian cymbals, Tama drums, and Remo heads. You guys rule! Until next time, stay safe and rock out. See you in L.A. for winter NAMM, and be sure to stop by my websites for additional info.