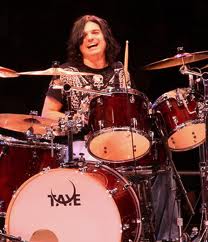 Hello, fellow drummers! With the fall classic as my backdrop, I wanted to share a piece of advice a great drummer once told me. He said, “You have to know when it’s October.” So right he is. For those who are not on the same page, you must be a Cubs fan. Just kidding. Let me try and explain.

My name is Jules Radino and I’m the current drummer for the band Blue Öyster Cult. I’ve held the drum chair since the fall of 2004. It’s a great band with even better people. When I’m on the road I try to follow the same routine in terms of warming up before the show. It helps keep me centered. You play every show like it’s your last and give everything you got. Sometimes the human element will come into play, and today you can’t get something going that was working yesterday. But you make adjustments. Then there are the shows that you know you have to be on for. You have to be dialed in and really bring it—this is what I mean by “you have to know when it’s October.”

Some people may say you’re still playing the same, trying just as hard, and you are. But sometimes the intensity level needs another click. You need to be clutch. And it’s the people who are clutch in the right situations that become great.

A quick story: Years ago I went to an open-mic jam in NYC. I got there early and waited and waited and waited for my turn. Finally, at about 2 a.m., I was called up to the stage. What a horror show. I was playing with guitar players who were getting yelled at by the host of the open mic! I’m playing and thinking to myself, “What am I doing”? As I’m thinking this, a guitar player, who’ll remain nameless, walks through the door. I immediately think those words, “Play like it’s October!” Long story short, he tells everyone to get off the stage except me and we jam for an hour with the house band. A week later I’m on a month-long tour in Europe and a year after that I’m lucky enough to get the BÖC gig. The bottom line is, you’re not going to be “on” for every gig, but when you need to be, play “like its October.” Oh, and the drummer who gave me that piece of advice: Bobby Rondinelli.

Thanks, and please feel free to check out my site, www.JulesRadino.com.