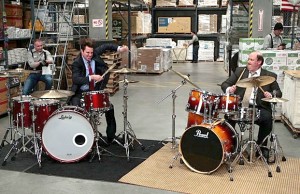 Hello again, MD readers. My name is Steve Moore, aka the Mad Drummer. Some of you might remember me as “the Drummer at the Wrong Gig” on YouTube. To say I’ve had the best year of my life would be an understatement! When I wrote my last MD blog, I shared the terror of performing my first drum festival at Woodstick. However, as you may remember, it turned out to be one of the happiest days of my life.

After Woodstick I flew to Belgium to perform at the Adams Drummers Festival. There I performed with Benny Greb, Mark Schulman, and Keith Carlock, and suffered the incredible disposition of following Thomas Lang! Very few drummers could follow a monster like Thomas and claim victory, and I’m certainly no exception. However, I did manage to regain a little steam when Mike Portnoy decided to jump onstage with me to help close the show. Closing a show of that magnitude, alongside a legend like Mike Portnoy, is not something I’ll soon forget!

That’s a lot of excitement for one year. However, several weeks ago I received an email from the casting department of the TV show The Office on NBC, asking if I would like to be on the show. It took some fancy routing, as I had an appearance with Rick K. & the Allnighters in Indiana only a few days later. So I packed my clothes, jumped on a plane, and headed for L.A.

When I stepped off the plane there was a driver waiting to take me to the hotel. I arrived at 1:00 a.m. and went straight to bed, as I had to be on the set at 7:30 a.m. Once on the set, they shuttled me back and forth from wardrobe to makeup while introducing me to people along the way. Every person I encountered seemed to be in a great mood and happy to see me. That made all the difference, as I was obviously out of my element and a nervous wreck!

Next they took me to the warehouse, where a drum battle between me and Brian Baumgartner, who plays the role of Kevin Malone, would be filmed. Waiting for me was a beautiful red sparkle Ludwig drumset fitted with Sabian cymbals. I was then introduced to my drum tech for the day, Gordon Peeke, as well as to Brian and to Paul Lieberstein, who, in additon to being a writer/executive producer on the series, plays the character of Toby Flenderson. After making a few adjustments to the drums, we started working out ideas for the drum battle. Everyone was open to ideas and extremely patient and kind-hearted.

A few hours later we broke for lunch. Being the new kid in town, I didn’t know my around. Lucky for me, Gordon kept me under his wing and stayed by my side practically the whole day. (Big props to Gordon!)

After lunch we went back the warehouse and began rehearsing the other songs for the show. The band had already worked out the arrangements the day before, so it was very easy for me to slide right in. A few minutes later I met the writers and the rest of the cast. Interestingly, the actors were very similar to the characters they play on the show. They were all very lighthearted and a lot of fun to be around.

As I turned around, James Spader, who plays the roll of company CEO Robert California, suddenly greeted me. He was very polite yet very inquisitive about the “Drummer at the Wrong Gig” video. He immediately began asking me questions about my background and the way I perform. At first I was extremely intimidated by him, because James carries a “presence,” much like Jack Nicholson or Al Pacino. He takes his job very seriously, and knows exactly what he wants. However, after the initial shock wore off, I really enjoyed talking with him. He’s a huge jazz and big band swing fan. In the end, he was a very charming fellow with a real appreciation of music history, as well as being a phenomenal actor.

We rehearsed the songs a few times with James and then began shooting the other three scenes. Everything went extremely smoothly. I believe we stopped filming around 6:00 or 7:00 p.m. I said my goodbyes, and my driver took me to the airport.

While sitting on the plane headed toward Indiana, I couldn’t help but feel a little sad. The day had gone by at such a fast pace that I hadn’t really taken it all in. I felt like a little kid on the last day of summer camp. I had made a lot of new friends and shared some terrific moments…but it was time to go.

For more on Steve Moore, go to www.themaddrummer.com.