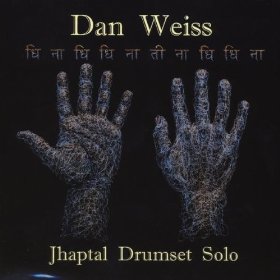 Named by the New York Times in 2009 as one of the “Five Drummers Whose Time Is Now,” Dan Weiss has kept that promise as a busy jazz sideman. His intriguing concepts, deeply influenced by Indian music, culminated in Tintal Drumset Solo, on which he applied tabla patterns to solo drumset. This follow-up CD is an even more challenging East-West mesh. Jhaptal is a ten-beat cycle of North Indian music. While a guitar continually outlines a melodic cycle, Weiss vocalizes each composition’s tabla bols (syllables representing strokes) then mimics it on drumset while expanding with improvisations. Technically it’s a stunner. But more importantly, it’s passionate, coherent, and mesmerizing. (www.danweiss.net ) Jeff Potter