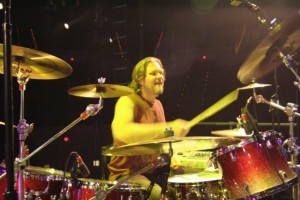 Hi, fellow modern drummers! Life has been incredibly busy in Nashville lately, so I’ll try to give a short version of what’s going on in the “hamster wheel.”

First, session work has been crazy! August was record month; I was blessed to work on the Brother Trouble record with Michael Knox (Jason Aldean, Trace Adkins) and on the Dustin Lynch record with Brett Beavers and Luke Wooten, and I did some Christmas music for Justin Moore with Jeremy Stover. Jeremy also started a record with Drake White (Universal) and JJ Lawhorn (Average Joe), and I got to play on some tracks for Lee Brice’s new record. There were also plenty of demos. I love doing demo sessions because I get to hear the cream of the crop of new songs coming out of “Nash Vegas.”

Reba is launching into a new tour this fall with the Band Perry, Eden’s Edge, and Thompson Square opening. I’ve been blessed to get a kit for this tour that was just turned back in by none other than Billy Cobham. I had all of his records growing up—I was an addict! We’ve got a week of production rehearsals coming up, and Yamaha is sending the kit to the arena, so I can’t wait to hear it. It’s a very large Yamaha Absolute Birch set—hopefully it’ll have some of Billy’s mojo left on it!

I’ll keep you all posted on happenings. Please feel free to visit www.tommyharden.com, and check out my “5 Minute Monday” videos. I’m also on Twitter: http://twitter.com/tommyharden. Blessings!