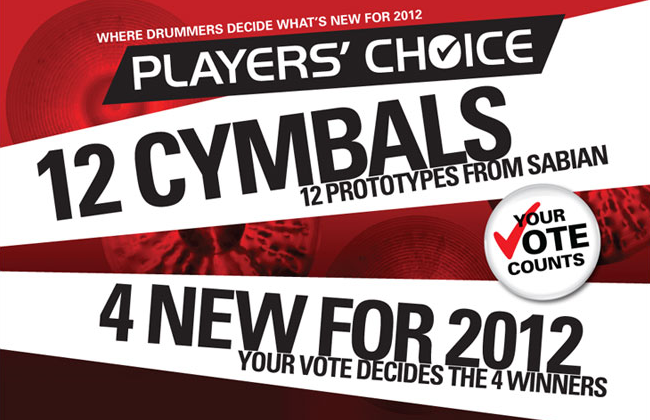 With the introduction of Players’ Choice, Sabian is providing a forum that allows drummers from around the world to choose its 2012 product offering. According to the company, it’s the first time an instrument manufacturer has ever done so. In addition, Sabian will bring together a diverse group of its top endorsers to play the new cymbals so that drummers everywhere can watch, and choose.

Sabian’s Vault artisans have been asked to develop a list of twelve new cymbal models, including rides, crashes, hi-hats, and effects models. The cymbals will be shipped to a studio in California, where a group of Sabian endorsers, including Mike Portnoy, Dave Weckl, Neil Peart, Terry Bozzio, Dave Elitch, and Stefanie Eulinberg, will be filmed playing the cymbals in all styles and genres. Viewers will be able to watch video online and vote to eliminate one cymbal each week, for eight weeks. At the end of the eight weeks, the top four cymbals will be announced as Sabian’s new product offering at the annual NAMM show.

The voting begins October 17, 2011. A complete list of cymbals and endorsers will be featured at www.CymbalVOTE.com, so drummers are encouraged to register now. Each week, anyone who has signed up will receive a text message when a cymbal is voted off the list, prompting them to vote again for their favourites, all of which can be done conveniently from their mobile device.