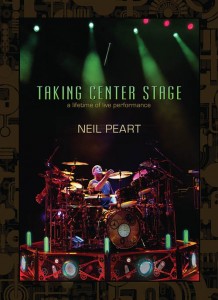 This jam-packed DVD follows Neil Peart during Rush’s 2010/11 Time Machine tour, featuring an entire two-and-a-half-hour concert, with cameras focused exclusively on the drums and a Neil-heavy audio mix. Each song from the concert is preceded by discussions between Neil and drummer, Hudson Music senior drum editor, and Rush fanatic Joe Bergamini. These interviews are set in various stark but beautiful locations in Death Valley National Park and offset the concert and rehearsal footage in a creative way. Also included is footage of Neil’s drums-only pre-tour rehearsals, Rush’s complete soundcheck, and Neil’s pre-show practice-room warmup. Bonus features include performances of a few songs that didn’t make it into the tour’s final set list, and a one-hour breakdown of one of Rush’s newest songs, “Caravan.”

If you’re a Peart devotee, you’ll drool over the detailed shots of the concert performance revealing all of the intricate details of those classic parts. The overhead shots and slow-motion footage are particularly revealing of Neil’s complex choreography. Even if you’re not a Rush fan, you can learn from the wisdom of one of the world’s most successful performers. Neil’s practical tips include listening to the vocal phrasing to determine tempo, how to hit hard without hurting yourself, and how to navigate odd time signatures. Of course, the audio and video recording and editing are top-notch, as expected from Hudson Music. Bergamini’s contribution is also extremely important; his talks with Neil are from the perspective of both a fan and a fellow professional musician.

Some viewers may find that despite his best efforts, Neil still seems somewhat more enthusiastic when discussing his current work, rather than the Rush songs of the ’70s and early ’80s. One certainly can’t fault the man for living in the present, and I for one hope that fans of Rush’s “classic” era will realize that there is also plenty of amazing music and drumming to be found in the band’s more recent endeavors. Paul Wells