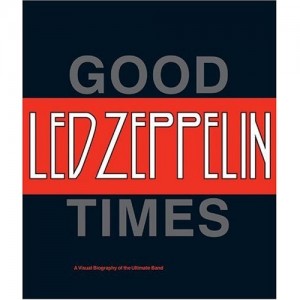 Zeppelin fans, you may not have seen all there is to see of your favorite group after all. Whether you learn much from the text of Good Times, Bad Times depends on how much you’ve already read about the legendary quartet. But no matter, really—this is a photo book, and it follows through on its “visual biography” subtitle with an abundance of images, many previously unreleased, from every phase of the Zeppelin saga, including 2007’s London reunion show. There are extraordinary live shots of John Bonham, including one from 1969 where he’s obscured by fog as Page and Plant square off in front of his drum riser. (How did that lightweight hardware hold up under the Bonzo fury?) And there are vivid offstage photos as well, which help us get to know a mystery man about whom there are precious few personal details. We see him wearing an “I wish I could bite somebody” Snoopy shirt in 1970, futzing with chopsticks in Japan in 1971, and playing acoustic guitar with a wide grin on Mick Jagger’s estate in 1972. It’s a worthy complement to some of rock’s most inspired music. (Abrams) Michael Parillo