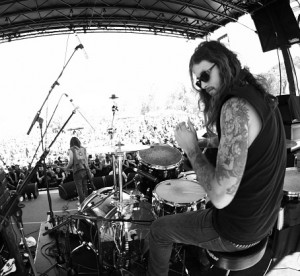 Hi, MD readers! My name is Scott Batiste. I play drums for Saviours, a heavy metal band from Oakland, California. I’ve been reading Modern Drummer since 1988. After all these years following the magazine, it’s a true honor to be asked to contribute. I still remember being in fifth grade and getting my first issue with Charlie Watts on the cover and trying to decipher those heavy-duty Stones charts!

From that time on I’ve been obsessed with rock, rock drumming, and the music industry. Through junior high and high school I practiced constantly, formed bands of varying (but mostly low) quality, and ambitiously played out of town more and more. I also started playing guitar during this time, which made my understanding of playing with other musicians develop quickly. Four months after high school ended I was on my first U.S. tour with a local punk band. I got bit by the touring bug, and I’ve been out on the road ever since. I’ve played in bands of varying styles, from frenzied hardcore to remedial garage rock to speeding metal, and in all sorts of situations, from empty bars to packed grange halls to legendary Tokyo punk clubs to gigantic U.K. festivals. Nothing puts things in perspective like playing to twenty people in a dark, musty bar at midnight and the next day playing to ten thousand screaming, bouncing kids.

Along the way I’ve seen a lot behind the scenes, watching my bands and our peers win great victories and suffer great failures. All of the clichés of the rock biz are clichés for a reason: They mostly ring true. That A&R guy who promised you the moon was laid off yesterday, and the budget for your breakthrough album is now in limbo. That promoter who begged for you to come play his city can’t explain why he can’t pay you more than $200 for the sold-out show you just played. (He owes the venue for all the money losing shows he’s done recently, and your good night just paid that debt.) Your manager doesn’t hear the hit in these new demos. Neither does your lawyer. Your amazing lead guitar player is terrified of flying and becomes a pill-popping, anxiety-ridden puddle during travel. All your bandmates’ girlfriends hate you because you just updated the guys on the next four months of tour dates. It goes on and on, and it’s a constant learning experience.

Over my years immersed in it, I’ve become more and more involved in band business, as I’ve seen and learned from the pitfalls and become a manager of sorts. We’ve watched the industry change from a sales-based one to one that’s still trying to find its identity. Sales are a fraction of what they were ten years ago. Old bands large and small that supplemented their incomes or lived off their back-catalog royalties are now back in action, creating a massively over-saturated touring market that also pays a fraction of what it did ten years ago, partially because there are too many touring bands and partially because of the ticket agencies’ ever-growing take of the ticket sales.

The only way to really learn these lessons is firsthand, so I’m not going to pretend like I’m any kind of guru. These are just my observations, and I still learn new lessons on a daily basis. Saviours started in 2004 with guys who had all been on the road since their teens and were at least somewhat familiar with all these scenarios. I’d been playing more guitar than drums and already had a concept for a heavy band (and riffs upon riffs to back it up), an aesthetic vision, and an uncompromising business plan, for better or for worse. I write roughly seventy-five percent of the riffs and then have to start at square one with the drum stuff once I’ve shown everyone the guitar parts. I found myself subconsciously writing in “comfortable” zones, meaning I wouldn’t write anything on guitar that I couldn’t play on drums. So I tried to break that habit and veer into the unknown. I really tried to up the ante with my drumming, learning tasteful double kick placement after twenty years of playing single kick, and trying to bring my level of inter-limb interdependence and solid meter to a level that I was really happy with. That’s an everlasting battle, but when I nail it, it’s satisfaction.

On top of the actual music, which is always first and foremost, I’ve designed or commissioned all the artwork for CDs, LPs, and T-shirts, and prepared it all for production. I booked whole U.S. and European tours myself and now work with booking agents that we’ve chosen to represent us. I still hold these agents to the standard of the booking work I did, and I’ve fired some! I deal with the record-label guys, arranging release dates, video shoots, and store promos, picking vinyl colors, etc. I pursue international licenses for our U.S. releases. I work with the PR guys, lawyers, and anyone else involved in the business of the band. Then we tour—and I set up and tear down drums every night, monitor merch stock, drink too much, etc.

We’ve worked hard and done our best to stay on the ball with all these people, and it has taken us around the world more times than I can count. Saviours have done well over five hundred shows in twenty-two countries, we’ve done an Ozzfest tour and major European festivals, and now we’ve released our fourth album, Death’s Procession. And a ninety-four-date world tour takes us through December.

Through all of it, I’ve learned two big things. First, run the business but don’t let the business run you—or write your tunes. And second, have fun! If you’re on stage going through the motions, hating this menial chore, it’s time to hang it up and go home. Your crowd can tell, your band can tell, and it doesn’t do anyone any good. Maybe I sound like a bitter control freak. Perhaps. But I feel that there wasn’t any other way to approach it. I’m still broke, our girlfriends are pissed at us, and you know what? It’s still fun, I’ve stayed true to what I wanted to do, and I’ve done a bunch of cool stuff and played music in more places than most people could imagine. No complaints.

That’s all I’ve got for you. Shout-out to Bill Ward, Vinny Appice, Mikkey Dee, Henry Vasquez, Meinl cymbals, and my lovely woman for the inspiration. Thanks for your time.

For more on Scott Batiste and Saviours, go to www.myspace.com/saviours666.