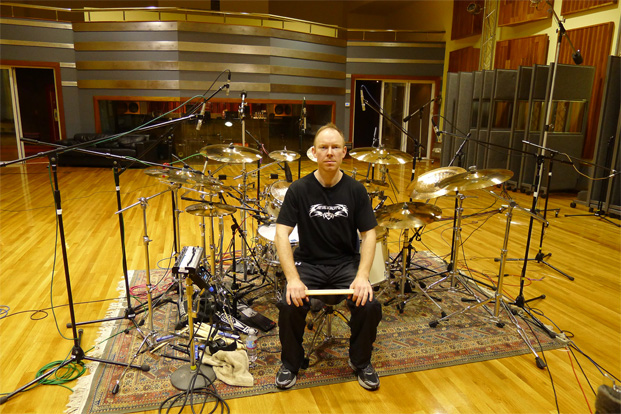 Richard Christy Performs “Admire the Heroes” from Cold Winds on Timeless Days, the New Album by Charred Walls of the Damned

The December issue of Modern Drummer magazine contains an Update story on Richard Christy. In it, the drummer and leader of the band Charred Walls of the Damned talks about the group’s brand-new album, Cold Winds on Timeless Days; here Richard offers us exclusive video of him performing the album track “Admire the Heroes.” Richard filmed his drum takes while recording Cold Winds On Timeless Days at the Hit Factory/Criteria studio in Miami, Florida, earlier this year. Those takes, filmed with two different cameras, were edited into the video below.
According to Christy, he was going for  a more organic and spontaneous-sounding performance with the new Charred Walls album album, which he spent a mere two days recording the drums for. “The drum sound on Cold Winds on Timeless Days turned out better than I ever could have imagined,” Richard enthuses, “thanks to engineer Mark Lewis, the amazing drum room at Hit Factory/Criteria, and all of the great equipment that I endorse, including ddrum drums, Sabian cymbals, Vater sticks, Axis pedals, and Aquarian heads. Rehearsing the full album every day for two months straight definitely helped too.  “Fortunately I set up a couple of video cameras at the studio and filmed a lot of my drum tracking,” Richard goes on. “We did three or four takes straight through on the drums for each song, so what you see on these videos isn’t necessarily what we used on the album. You’ll notice that some of the drum fills don’t match up exactly, for instance. But they’ll give you a great idea of how amazing the drum room at Hit Factory is, and how we were able to get a very natural drum sound.”

To read more with Richard Christy, check out the December issue of Modern Drummer, on sale now.