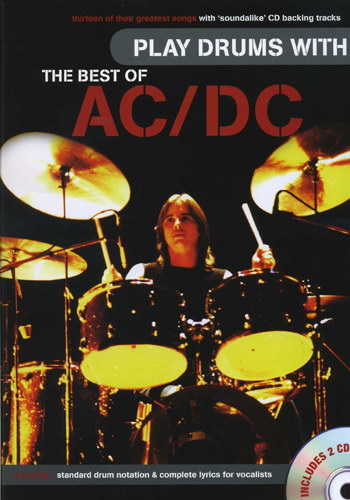 For decades, legendary Aussie rockers AC/DC have so unapologetically celebrated their lack of creative evolution that it might seem pointless to study drum charts for the band’s greatest (or any) songs. Before MD offices get flooded with irate emails taking issue with the last statement, let’s get one thing straight: This book/CD combo uncovers unexpected subtleties of timeless drum performances, thirteen of which are presented here in music notation and sound-alike audio forms. It seems copping longtime AC/DC drummer PHIL RUDD’s parts on “You Shook Me All Night Long” or CHRIS SLADE’s playing on “Thunderstruck” requires nearly as much forethought as brute force. Although the pileup of printed lyrics and tiered guitar/drum tabs can, at times, cause reader confusion, the text reinforces one major point: AC/DC’s relentless rock and roll ain’t mindless noise pollution. (Wise Publications/Hal Leonard) Will Romano