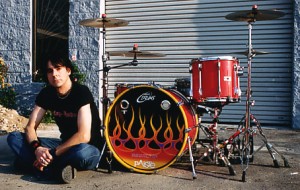 Hello to everyone in Modern Drummer-land! Tod T. Burr checking in. For those of you new to my crazy life, here’s a quick recap. After ten years of working nine to five, playing in multiple bands, and trying to get signed in the constant insanity of the L.A. music scene, my life changed when I was offered a job at the Drum Doctors studio, drum cartage, and rentals facility in the mid ’90s. At first I was just making deliveries and pick-ups, but in no time I was setting up drums in major studios, at TV shows, for music videos, and at live performances for some of my favorite drummers. Some have even become close friends.

Now, I had always been a drum geek—reading drum magazines, hanging out at music stores, chatting with drummers at shows, and basically tinkering with my own drumset for years on end. But the experience and knowledge from working constantly with every brand of drums was like being a kid in a candy store. Drum tuning, recovering, knowing drummers’ personal setups and specs, microphone placement, developing music business contacts, and dealing with music business politics were some of the many skills I acquired while working at Drum Doctors.

It was during this time that I finally achieved one of my life’s goals: My metal band, Substance D, got signed! Balancing working at Drum Doctors, touring with Sub D, and married life proved too taxing, so I left Drum Doctors to concentrate on playing full-time. Once again fate intervened in the form of a phone call one of my oldest friends, Dave Jewell, product manager of Yamaha Drums, from whom I purchased my first new drumset when he was working at Milano’s Music in Phoenix, Arizona. I was living in Arizona as student at A.S.U. in the 1980s when I met Dave.

Fast-forward many years later; Dave was hired at Yamaha and we both now live in Southern California. Dave had asked me to help him at the 1997 NAMM Show, setting up drums at the Yamaha Drum booth—once again, a kid in a candy store! In January of 2000, Dave asked me to drum tech the first Yamaha Groove Night at S.I.R. Studios in Hollywood. I have worked at almost every NAMM and Groove Night since. Working with Steve Gadd, Tommy Aldridge, Russ Miller, Gerry Brown, Randy Cooke, Jimmy Chamberlin, and many, many other Yamaha artists and the fantastic Yamaha employees every year has been a dream come true.

Once again, as fate deals me another winning hand, after the fantastic show at S.I.R. Hollywood I was offered a job in the S.I.R. Hollywood drum department. Rising up the ranks to eventually become the drum department manager offered me the additional skills of management, dealing with vendors, and artist relations. During my stay at S.I.R., I was still able to tech the occasional video shoot, live show, and studio gig while performing in as many as ten bands at once. Substance D had broken up by then, so I was playing in as many bands as I could, most notably with TUFF and with the Druts, featuring Chuck Garric of Alice Cooper’s band. Both bands were playing constantly at the time, and I was incredibly busy. With both Substance D and TUFF I was also able to do multiple tours of Europe. Another one of my dreams fulfilled!

Two thousand five became one of my busiest years ever, when I was asked to be the drum tech for INXS on the CBS TV show Rockstar: INXS. At the conclusion of the taping, INXS’s manager asked if I was interested in touring as Jon Farriss’ tech. Of course I jumped at the opportunity. During this time, former MCA band Pretty Boy Floyd asked me to sub for their 2005 Japan tour. Over the course of two weeks at the end of 2005 I achieved two more lifetime goals: INXS was rehearsing in Australia and Pretty Boy Floyd was touring Japan—two places I had always wanted to go.

In late summer of 2010 I was asked to be the drum tech for a Lexus car commercial. What an inventive and interesting experience; it would fill an entire blog—maybe next time! The very next week, after the Lexus shoot, an old friend of mine, Brian Tichy, asked me to drum tech The Groove Remains the Same: A Tribute to John Bonham. Twenty-two drummers were sharing one Ludwig Vistalite kit. Another fantastic show that could fill its own blog—so successful in fact that we had a two-night repeat performance at NAMM 2011.

Looking back on the past few years as a touring drum tech, I’ve been blessed to travel the world many times over, filling my passport three times and visiting places most people only dream of. INXS, Def Leppard, and Motörhead have been amazing bands to work for, and I’m grateful to them for using me as their drum tech. In between touring, my own bands have been patient, allowing me to tour as a drum tech while still playing as many as 100 to 150 shows a year around the world with them.  Thanks to Merle Jagger, TUFF, Freedom Under X-Ray, King Con, and a host of other bands I play with!

P.S.: I recently played drums for Essra Mohawk for a last-minute Los Angeles show—Google her, you’ll be surprised.

See you on the road this summer with Def Leppard and Merle Jagger.

For more on Tod T. Burr, go to www.tmburr.com, www.facebook.com/tmburr, or www.youtube.com/tmburr. And to check out a behind-the-scenes video of the Lexus commercial Tod worked on, go here: www.youtube.com/watch?v=CMcWk5w_37w.