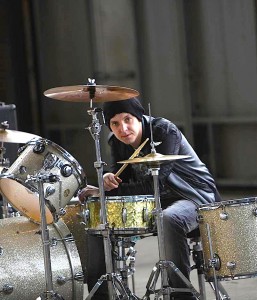 Hello, Modern Drummer readers! My name is Shane Cooney, and I am the drummer for the Irish rock trio Kopek. Being a co-writer and co-producer, this blog may lack the usual accurate drummer tech facts—what skins I use, sticks, cymbals, etc. The truth is, I don’t really care—once they sound good and the track/song is complemented correctly, that’s the most important thing. No one cares how your snare sounds if the song itself isn’t good. The main priority in Kopek is the song, then the sound. While recording our album White Collar Lies, I used DW drums, but while rehearsing for the tour I discovered that a Ludwig kit gave me a better sound in venues while at the same time replicating the recorded sound. I always use a 26″ bass drum and a miss-match of sticks—in my right hand a 5A nylon-tip and in my left a 5B wood tip. Don’t ask me why! The main priority for me is the flow of the track, not how good I play it. I don’t use sequences or click tracks live. Keeping it old-school!

Upon forming Kopek, our shared love of ’60s music became apparent—Led Zeppelin, Jimi Hendrix, the Doors…. If you listen to these guys you can hear how real music needs to be played. Live and loud! We try to adhere to the traditions in rock ’n’ roll while recording and touring—no clicks, no backing tracks, just plug in the amps and let’s go for it! After touring the U.S. for five months straight, my drumming levels have increased unbelievably—and so have the amount of sticks I go through per night, ha! Overall the level of talented drummers in America is unreal. Every time I share a stage in America, the majority of the time the drummer from the other band will be light-years ahead of me in ability. The only thing I have is my personal drumming style, which just about gets me through the night. No tricks, no flicks, and no solos—just play the beat!

For more on Shane Cooney and Kopek, go to www.kopekofficial.com.