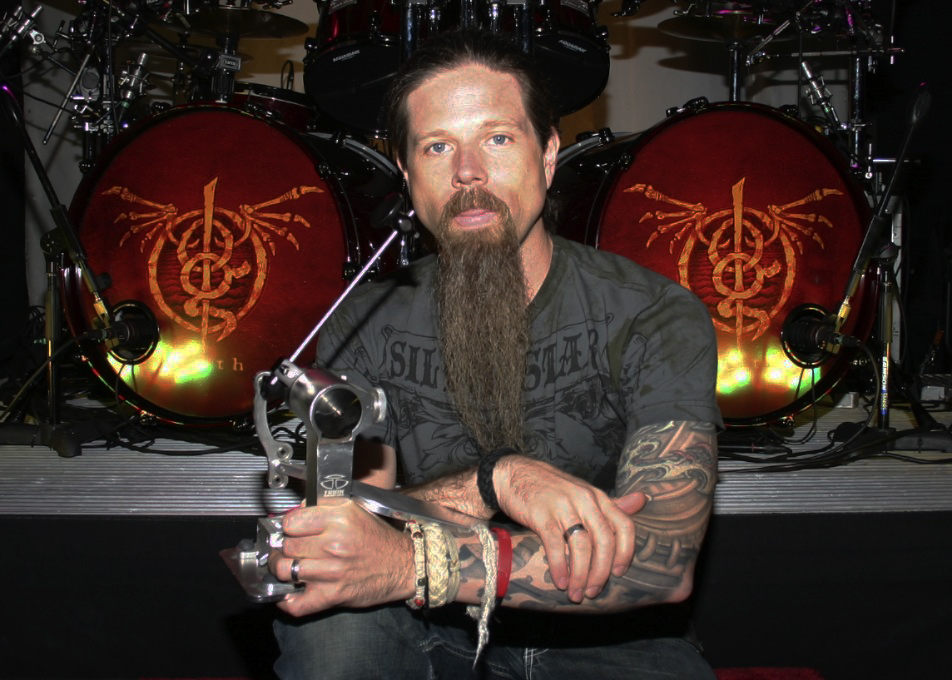 Chris Adler, drummer for metal megastars Lamb of God, has a voice and approach all his own, yet he didn’t even begin to play drums seriously until he was already in his twenties. He did, however, grow up studying piano, saxophone, and acoustic guitar before finally settling on playing bass for several high school bands and other projects.

While attending Virginia Commonwealth University in Richmond, Virginia, Adler continued to play bass, record, and tour. He eventually got his first drumkit—a dilapidated monstrosity with a faulty footboard and uneven legs—but he didn’t find his calling until 1994, when he reunited with some members of his freshman dorm to start a band. The bass spot was already taken, so Adler turned to drums full-time.

The band, known at the time as Burn the Priest, recorded two 7″ singles and one full-length CD and toured incessantly over their five-plus-year career. They became one of the most downloaded metal bands ever and soon caught the attention of record labels. A switch in guitarists, a record deal, and name change later, Lamb of God was officially born and ready to explode.

Adler’s precision, speed, and atypical style has powered Lamb of God through a slew of progressively more successful records. The band has also released a number of performance DVDs and scored a couple of Grammy nominations. With each passing year and on every record, Adler’s playing has continued to progress, most recently earning him recognition in the 2011 Modern Drummer Readers Poll for top metal drummer. Chris’s performance at the 2005 Modern Drummer Festival is captured on DVD, and his instructional book The Making of New American Gospel dissects his playing on Lamb of God’s debut 2000 album.