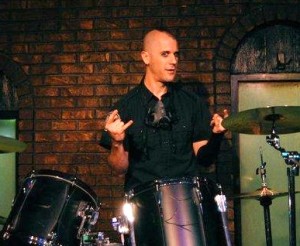 Hey, everyone. I’m Justin Lack and I’m a professional drummer and drum teacher from Chicago, Illinois. I’m the drummer for the industrial metal band Fashion Bomb. I also play with singer/songwriter Matt Ryd and a number of other groups in and around Chicago. I endorse Ahead drumsticks and Paiste cymbals.

I started drums at twelve years old, playing everything from jazz to punk rock to classical through high school. After that I attended Berklee College of Music in Boston, Massachusetts, where I had the chance to work with two of the best drummers I’ve ever heard. John Ramsey was the nicest guy you could ever meet, very patient and a great teacher. Dave DiCenso was my private teacher for a semester; he was incredible and showed me new ways to practice and think about drumming in general. More than technique, I learned a philosophy about drums that I carry with me to this day. I’ll write more on my experience at Berklee in coming entries.  After college I was sort of burned out on drums and music in general. I went about five years bouncing from office job to office job until one day on a whim I decided to unpack my drums in a friend’s new apartment. My love for drumming had returned, and I haven’t looked back since.

In 2008 I decided I’d had enough of the rat race. I quit my job, joined Fashion Bomb, and started playing and teaching for a living, and my life has been an awesome and crazy ride ever since. With Fashion Bomb, I have seen almost the entire country, shot a music video, and played in front of thousands of people. We’re currently writing music for our third album. Look for the official video for the song “The Meek” very soon.

I also have my own YouTube page, where I post my drum videos. If I had to pick my favorites, I’d definitely say my version of Beethoven’s 9th Symphony followed by my metal drum cover of “St. Elmo’s Fire.” Check out those and other videos at www.youtube.com/jlack04.

In November 2009 I took over as head drum instructor at The Rock House in Wilmette, Illinois. The focus of the school is pop and rock music. We get kids together in bands as quickly as possible, showing them that music is more of a team effort than many music schools would have you believe. Listen to the arrangement I did of “Wipe Out” for five drummers, two guitars, bass, and keys. It’s linked to on my YouTube page. I’ve also just finished my drum book, which I’m self-publishing, so look for that on the web soon.   I’m always accepting gigs and students and love talking drums with people. If you’re interested in chatting, shoot me an email at JustinLackDrums@yahoo.com. Thanks for reading!

For more on Justin Lack and Fashion Bomb, go to www.fashionbomb.net.