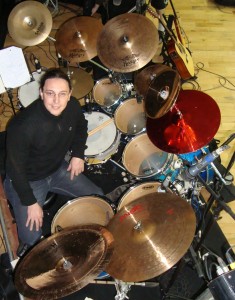 I am Cristiano Forte, a Brazilian drummer working professionally in music for twenty-two years. I’ve had the opportunity to play on stage and in the studio, work in music education, and be a finalist in competitions for drummers, among them the 1st and 2nd Contest Musicians from the Southern Cone and Batuka, the latter organized by Brazilian drummer Vera Figueiredo.

Recently I went through a period focused on music education, beginning as a volunteer teaching music in social projects. Shortly after I was hired by a school to teach music. After this experience I began working toward a degree in education at the Universidade do Extremo Sul Catarinense in Santa Catarina, Brazil. I spent about four years emphasizing this part of my life, staying somewhat away from the stage during that time.

In 2009 I resumed activities as a musician, and work began to flow very well. Since I was also teaching drums and music education, I could have great freedom to select good jobs to work as a drummer. Currently, in addition to teaching classes, I perform with eight bands in different musical styles, including bossa nova, MPB (Brazilian popular music), and classic rock. I’m also in an instrumental group called Humatumotabum, founded in 1997, that has as a main feature an unconventional formation—me on drums, Rodriggo Campos on percussion (www.myspace.com/rodriggocampos), and Nunes Neto on bass, using a technique that involves two hands playing harmony and melody.

Another passion that has accompanied me since childhood is the motorcycle, beginning with a tour on the back of my father’s bike. For a long time I resisted buying a bike, due to security issues because of my work as a musician. But in 2003, for reasons of fuel economy, I bought a small motorcycle. Later the bike became something essential in my life.

In 2009 I decided to venture into motorcycle trips and I created the project Strong Winds I, in which I traveled alone on my bike for a month, 11,500 km in Patagonia. In 2011 I found that I could unite my two passions, drums and motorcycles. I started the project Strong Winds II, which had a challenge: to carry a mini drumkit in my luggage and record myself playing it in interesting and faraway places—at the Atlantic Ocean, at Pacific Ocean, at Aconcagua Paso, and at Dark Water. I drove 7,300 km in nineteen days of travel on the roads of Brazil, Uruguay, Argentina, and Chile.

A major difficulty of this experience was no doubt accommodating the kit on the motorcycle. At Paso Dark Water in the Andes, at the border of Argentina and Chile, the altitude of 4,780 meters above sea level made it very difficult to make the recording. You can watch the video of my motorcycle adventure below.

Finally, I wish to share with others readers a recent and happy surprise I received when I saw my name mentioned on two occasions in the April 2011 issue of Modern Drummer Brazil, in which the magazine did a special edition talking about the history of drums in Brazil.

A “STRONG” hug, and please follow my contacts so that we can continue talking.

For more on Cristiano Forte, go to www.cristianoforte.com.br. You can also follow him at twitter.com/cristianoforte, or check him out on FaceBook at facebook.com/profile.php?id=1516320254.