My name is Leesa Harrington-Squyres, and I’m the drummer for Lez Zeppelin, the all-female Zeppelin experience from New York City. 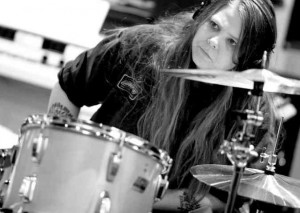 Drumming is like having sex—it’s great exercise, it takes incredible stamina, you sweat a lot, and the release is orgasmic! That’s how I feel every time I get through playing with my girls in Lez Zeppelin.

If you’d told me twenty years ago that I would one day be touring the world playing the music of Led Zeppelin, I would have called you crazy. Of course, all musicians dream of making it big by writing, recording, and performing their own music. Unfortunately, only a fraction of the millions of bands actually make it. I’m one of those people. I have been in countless bands and projects and have helped write and record some pretty awesome original music—music from the heart, my “children,” if you will.

After a few decades of failed projects, I had the opportunity to play with LZ. I wasn’t sure at first how I would like playing someone else’s music all the time, but so far I am having the time of my life! It’s a very rewarding gig. We take the music of Led Zep and bring it to audiences that truly appreciate what we’re doing. Some of those folks never had the chance to see LZ live before they disbanded. We give them the ultimate Zeppelin experience.

I try to stay true to Bonzo’s technique, as well as his equipment. I have a Ludwig Accent Bonham reissue, which consists of an 18×26 bass drum, an 11×13 rack tom, 16×18 and 18×18 floor toms, and a 6.5 x 14 Ludwig Supra-Phonic snare. I use the new Ludwig Speed King pedal—it came with the kit and I fell in love with it—with my DW pedal as a backup. I have a Paiste endorsement, and I have 18″ and 20″ 2002 Rock crashes, a 24″ 2002 ride, 14″ 2002 Giant Beat hats, and a 36″ symphonic gong. My backup snare is a custom-built maple drum from District Drum Company, with a custom wrap depicting my LZ symbol (found on my front bass drum head). I endorse Pro-Mark drumsticks and use 5B natural wood-tip sticks.

We released Lez Zeppelin 1 in September 2010. When I recorded, I used a vintage Ludwig Accent kit from 1970. It was all the same dimensions as my reissue, except the bass drum was 18×24. Hands down, it is one of the best recordings I have ever been a part of. Going over the parts with a fine-tooth comb—breaking them down to the bare bones—I realized what a monster John Henry Bonham really was. I already knew what all of us drummers know—that he was the best rock/funk drummer that ever lived—but when I had to record his drum parts, that is when I knew I had the best job ever! I put my all in that recording, and I think it shows. It may not be my music, but it is just as rewarding.

My advice to new drummers would be to listen to and be part of the band—don’t just be the beat in the back. A great drummer listens to every member of the group and isn’t scared of constructive criticism. Use your talent to be just as important as the guitarist or singer. Remember, the band is only as good as its drummer. LESS IS MORE!