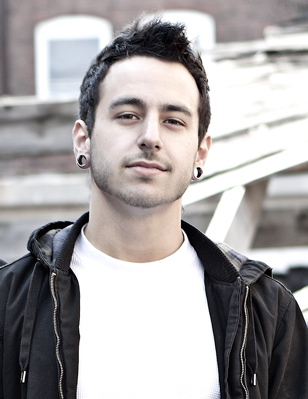 My name is Adam Gray, and I play drums for a band called Texas in July. I started playing at a very young age, using pots, pans, and sticks from the woods. At age four I received my first drumkit, then another at age six. Since then it’s been a passion; I found myself relating everything I saw to drums. Over the years it became clearer to me that I wanted to play music for the rest of my life.

Texas in July started when I was a freshman in high school. Ever since we wrote our first song, I’ve been hooked on writing music. Texas in July recently got out of Planet Z studios after recording our sophomore album and debut release Equal Vision Records, One Reality. Writing the drums for this record was a rush. With a time limit of two days to compose the drum parts for eleven tracks, I felt very challenged. I ended up going into the studio with seven songs roughly outlined, with the only option of improvising the rest. I was excited to see what I would come up with playing straight from the heart, with no premeditation.

Aside from Texas in July, I’m a huge fan of clinical playing. I love seeing what time signatures and patterns I can layer to make a cool sound. I’ve developed a workout that has four levels, with nine phases in each level. As you go up the levels your limbs become more independent. It goes from level one, where you work on leg and arm independence as pairs, to level four, which has each limb doing its own time signature and pattern separately. By the end of the workout you can layer any time signature on top of any other time signature, from 4/4 to 9/8. I’m also a big fan of break beats, funk, gospel, and in-the-pocket playing. It’s one of the greatest feelings to get lost in a groove with a sick bass line.

Showmanship is another large element of my playing. Just for fun I like to do stick tricks for visual effect. Performance always comes first, but I like to keep it entertaining to watch as well.

I don’t have a specific warm-up routine before I play, aside from stretching and a little bit of rudimental “jamming” on a pad. After I play I spend the majority of the time until van call building muscles that need work, as well as spending an hour or so just running over rudiments and practicing sticking techniques. I’m always excited to see a free room in a venue to set up my kick, snare, and hats for some actual kit time to jam. It is always rewarding to get the luxury of free time on the kit. I love to play drums, and I plan to play them for the rest of my life.

For more on Adam Gray and Texas in July, go to www.myspace.com/texasinjuly. Photo by Natalie Bisignano.