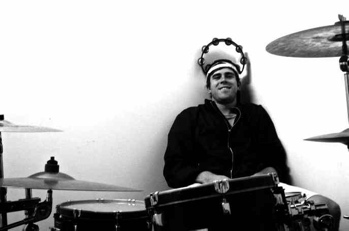 Hey, MD readers! My name is Ryan Cooney and I play drums in a band called the Gallery. We’re from Massachusetts, but have been touring the U.S. and spending extended periods of time in Florida and California the last few years. We recently recorded our new EP, Come Alive, at Swinghouse studios in Hollywood, California. It was a great experience for me, but before I get into that, I’d like to tell you a little about my drumming past.

I’m pretty humble about my drumming, because I should be. Unfortunately, I can’t say that I started playing drums as soon as I was able to hold a 5A stick. However, with the late start and all, I’m happy to be where I am now, making an effort to have music and drumming be my career. Although my interest was there at a young age, I didn’t start to have a passion for drums until a good friend from middle school blew me away. Almost immediately after seeing him play at a talent show, I picked up a kit and started lessons.

Lessons only lasted four years, until college knocked on the door, but I’ve been playing for about eleven years now. There weren’t too many stretches when I wasn’t in a band, even if that meant sending demo tracks across the internet from Massachusetts to Florida, or playing Blink-182 covers at a guitarist’s fourteenth birthday party. It’s been interesting to see how my perspective on my role as a drummer has changed over the years. I have a lot of fun keeping my focus on the outcome of the song as a whole.

Most recently, the Gallery went into the studio with a producer named Warren Huart (the Fray, Augustana), and we grew a lot as a band. We were attracted to Warren’s recordings because of the raw, authentic rock sound, and thought that he would be the right guy to pull us in the direction we wanted to go. Going into the studio, I thought I had my role in the band all set, but ended up coming out being more confident in my ability to know what the band needs from me. We focused a lot on having grooves continue through the whole song. There wasn’t too much room for “cool,” and that was fine with me. We wanted smooth, classic drumming, like the blues music that rock has its roots in.

I used vintage Ludwig Vistalites at Swinghouse, and loved them. The snare I used for the record was aluminum, and I’m all about the loose and fat sound we got out of it. It was the snare that Warren used on a lot of his previous recordings, and was actually the initial factor that pushed us to start talking with him. Overall, the drums have a really raw feel. They’re heavy but accessible, which is what we wanted this time around.

Since the early days of this band, I’ve done a lot of rearranging in my life so we could ultimately be a full-time deal. The band has been writing, recording, and touring for only three years, but it took a lot of sacrifice and change to get to that point. I transferred colleges, my brother Brendan and our other guitarist Shea deferred from school in Florida, and we all worked and sold most of our belongings to afford a Dodge Ram 1500 conversion van. We wanted to start playing our songs around the country, and that was the only way it could happen for us at the time. As we hoped, a lot of opportunities have come from dropping virtually everything else and focusing our time on getting better as a band. I hope opportunities keep coming, and as long as they do we will keep making music.

Thanks to Modern Drummer for having me! Thanks to you for reading, and I hope to see you all at a show!