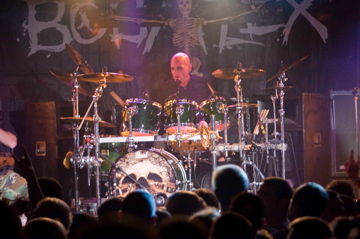 Hello, fellow drummers, friends, and fans. I’m here to tell you what has been going on with us. We have finished our new full-length album, Hell In My Heart. It’s been about a two-year process getting the songs and the recording completed.

We did four tracks with Chuck Alkazian at Pearl Sound in Michigan. Working with Chuck was great. He plays drums as well, so we connected. The rest of the record was completed at Sonic Lounge in Columbus, Ohio, with Joe Viers. Joe knows all of us personally, so that makes the whole process comfortable and relaxed. For the recording I used my Pearl Masters Custom kit. It’s a seven-piece kit with an 18×22 kick, 8″, 10″, and 12″ rack toms, and 14″ and 16″ floor toms. My snare is a 51/2×14 brass Pearl Sensitone. I am also signed with Sabian cymbals and use mostly models from their AAX line. They’re durable and really cut through. I’ve been with Evans for a couple years now; their drumheads just mix perfect with the Masters Series. For sticks I use Vater 5B signature series.

We’re hitting the road again for about eight weeks in support of the new album. We’re touring with Royal Bliss and Oceans Divide, and it’s such a lengthy tour that we will definitely hit a city near you. Live, I use the same kit described above, miked up with Audio Technica ATM 350s on all the toms, a Shure Beta 91 on the inside of the kick, a Beta 52 on the outside, and SM57s on the top and bottom of the snare.

Touring for this band comes easily. We usually average about 260 shows a year. When we’re not on the road, we spend a lot of time rehearsing. I spend four to five hours a day on the kit, and I do that five days a week when we’re home.

I guess that pretty much covers it for now. I would like to thank Modern Drummer for giving me this opportunity to speak to all of you; I’ve always been a huge fan of the magazine. Until next time, request “Bury Me With My Guns On,” buy our new album, Hell In My Heart, and I’ll see you in the trenches.