Hello, fellow MD drum lovers! My name is Aaron Stern, and I play drums in a newly formed rock band called D.R.U.G.S. (Destroy Rebuild Until God Shows). I’ve spent the last few years in transition after the demise of my previous band, Matchbook Romance. My first step in the process was going back to basics: sharpening my drumming abilities. I wanted to disappear for a while, work on my weaknesses, and then emerge back up on the scene at the top of my game and fully prepared for any opportunity that might come my way. I found an amazing teacher at the Drummers Collective in New York City by the name of Jason Gianni. We worked on technique, site reading, and four-way independence, but my world was turned upside down when he taught me the essentials of Afro-Cuban and gospel drumming. This opened up a whole new dimension to my drumming. It was liberating after feeling “stuck” in my playing for years.

At this point I seriously considered remaining a hired gun, because I thought there would never be another great opportunity for me to be part of a brand-new band. That quickly changed in November of 2009, when I got a call from my buddy Craig Owens, former front man of the band Chiodos. He asked if I was interested in making some music and perhaps being part of a new band. I was extremely excited because I knew Craig was a phenomenally talented front man whose abilities I admired and respected. We began writing music together along with Nick Martin (Underminded) and Matt Good (From First To Last) on guitar, and bassist Adam Russell (Story Of The Year)—all good friends and amazing musicians who had played in successful rock bands prior to this new project.

Early in the summer of 2010, we hit the studio with producer John Feldman (the Used, Story Of The Year, Good Charlotte) to record our debut album. To say I was excited to work with John would be a huge understatement. I had heard he was a stickler with drummers, and I was totally up for that challenge. We spent the better part of two and half months shaping our songs. Heavy emphasis was put on the groove, and it was my job to keep that pocket foundation. The music is super heavy rock, which required me to up my double bass chops and hit really hard.

The drum recording process was very intense. We wanted the passion to come out in the tracks, and so each take I was grinding harder than the last. John decided to set up the drums to be recorded in his living room because of its large size and rounded ceilings, which had made for some amazing drum sounds in the past. He then called up his go-to drum tech from Drum Fetish in L.A., who carted over an amazing selection of drums to track on. We ended up using a DW 18×24 exotic smart wood kick, a set of old ’60s-era Gretsch toms—8×12, 9×13, 14×16—and an array of 14″ snares including a vintage bell brass and Ludwig Black Beauty. There was vast selection of Zildjian cymbals at our disposal, of which we mostly used A Customs and Ks. Evans drumheads were used on all the drums, and of course I used my trusty Vater 1A wood-tip drum sticks, which give me the length that I need to whip hard into the kit. The final product is a really crisp drum sound that I am extremely proud of.

The D.R.U.G.S. debut album came out 2/22/11 on Warner/Decaydence records. I can’t help but be appreciative for where I am in my life and to have another chance to do what I love most. I am thankful to be in a band surrounded by musicians I admire and who inspire me, grateful to have had the opportunities to succeed and fail throughout my career, and indebted to fans, friends, and family who support me regardless.

My advice to my fellow drummers out there is to stay humble through success and failure, because they both come and go. Find your way to fly in the face of adversity. A huge “thank you” to Vater drumsticks, Zildjian cymbals, and Evans heads for sticking by me through everything, and to Modern Drummer for letting me rant on their blog site. Much love!

For more on Aaron Stern and Destroy Rebuild Until God Shows, including spring of 2011 Alternative Press tour dates, go to www.thisisdrugs.com,  www.twitter.com/drugs and www.facebook.com/drugs. 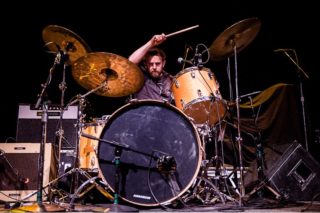 On the Beat with Mike Reilly from Hoots & Hellmouth: Learning to Sound Like Yourself