I love drums! I have rooms full of them! I only really feel complete when I’m doing something with them! I’m sure you’re all nodding in empathy.

This year has been an incredible, twisting journey in my drumming career, which has spanned over thirty years—and I’m only twenty-five! I’ve played the biggest festivals throughout Europe with Tigertailz, opening for Kiss, Velvet Revolver, Def Leppard, Whitesnake, Journey, Alice Cooper—you name the band and I’ve been on the same bill! This year I’ve been invited to join Verden Allen, who is a founding member of Mott the Hoople and was the instigator of the band reforming to play five (!) sold-out shows at the legendary Hammersmith Apollo in October of 2009.

The extended family of Mott/Bad Company has shaped rock of the last forty years, selling between them millions of albums and influencing the likes of Kiss, Queen, and R.E.M. It’s been an honour to be invited to join with Verden in his project Soft Ground. I’m so looking forward to playing some great gigs, including European festivals, and recording some of his great material that we are currently rehearsing. It’s going to be pretty awesome!

I’ve got several other projects on the go. Hang Fire is pure Southern Rock tinged with The Almighty, and we’ve recently shot a video for the song “Bodies” from the forthcoming album. Look out for some gigs with those guys. Also I’ll be playing the part of Eric Carr “The Fox” in the world’s longest-running and only officially endorsed British Kiss tribute band, Dressed To Kill. I’m a massive Kiss fan from a very early age, so to be invited to play with what’s probably the best tribute band in the U.K., if not the world, is such a great honour! Finally, there’s Glamnation, who are the U.K.’s leading tribute to ’70s glam rock, playing all those ’70s favorites from Abba to Wizard.

As far as my gear, I’m proud to endorse Paiste cymbals, as Paiste is the choice of my peers. I play one of several kits, depending on the situation. I use a double kick chrome Pearl Export for Dressed To Kill, I have a Tama Rockstar with a 24″ bass drum in chrome for Glamnation, and my weapon of choice for Verden is a Premier Black Shadow, which is simply awesome!

Now I would like to end on my secret bass drum sound. I’m always complimented on how my bass drums sound so great live, yet I’ve no hole in the front skins. Well, I fitted a AKG D112 into the bass drum and it’s the best thing I’ve ever done! I recommend it thoroughly.

All the best, guys, until next time. 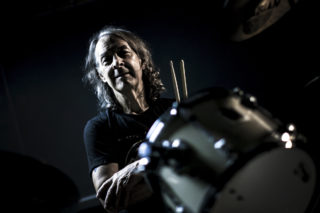 On The Beat with Albert Bouchard of Blue Oyster Cult and Blue Coupe: Talks Mentor Francis Clay and Playing Proud 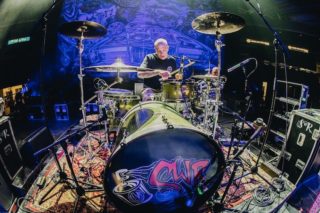 Carlos Verdugo of Sublime With Rome 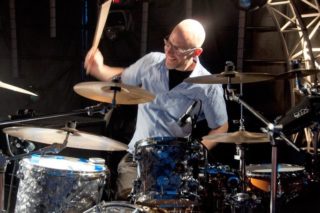