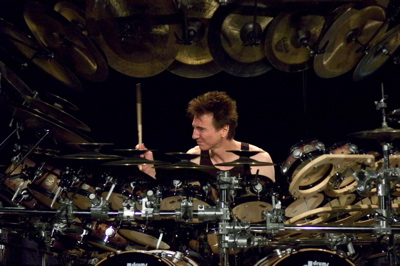 He called it “an unbelievable musical education, beyond my wildest dreams.” And indeed, for any alumnus of avant-garde rock icon Frank Zappa’s groups, Terry Bozzio’s 1981 recollection of his time with the genius composer/guitarist was typical.

Zappa was the greatest single employer of modern musical prodigies, a rarefied group of which Terry Bozzio is one of its most famous members. Heck, Zappa wrote one of the toughest drumming charts in history specifically for Bozzio. (Its title, “The Black Page,” was an easy hint to its unhinged complexity.) Clearly, in the halls of progressive music, Bozzio is a giant.

But that isn’t nearly the entire story, as any fan of Bozzio knows—and there are plenty of Bozzio-maniacs out there. TB has made his mark on the modern music landscape using a variety of tools and methods. With fusion pioneers the Brecker Brothers, he recorded one of the genre’s most lasting documents, the blistering and accurately titled Heavy Metal Be-Bop album. Along similar lines, guitar god Jeff Beck’s fusoid Guitar Shop album still fascinates and confounds drummers looking for advanced inspiration.

As a member of Missing Persons, Terry immersed himself in a technology-minded new wave pop structure; at one point he even forsook traditional acoustic drums for home-made electronic percussion, testing the patience of his most ardent chops-obsessed fans. Typically, Bozzio was more interested in stretching the sonic confines of music than fulfilling expectations.

In the ’90s, after returning to the acoustic drumming world refreshed and tweaked by his electro experiments, Bozzio became one of the most visible and experimental proponents of solo drumming. Terry’s spectacular one-man shows and highly regarded clinics at this time spread his influence beyond the drum world. His classical/tribal compositions, played on progressively immense drumsets, were undeniably staking new musical ground across the sonic spectrum. Setting up hypnotic rhythmic patterns with his feet on multiple bass drums and other pedal-accessed percussion, Bozzio would accompany himself with fantastically melodic and dynamic runs around banks of tuned toms and stacked cymbals. If there ever was credence to the term “one-man orchestra,” Bozzio was the real deal.

In recent years Terry has taken his symphonic urges to even greater extremes, releasing the well-received Chamber Works CD, with its long-form “Five Movements For Drum Set And Orchestra” putting to rest any argument against the drums’ potential as a viable lead instrument—in any musical genre.