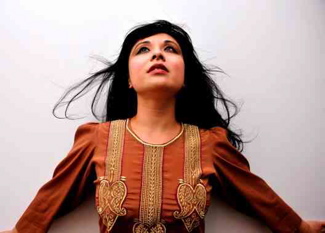 Hi! I’m Carol Bui and I’ve been writing, recording, and performing music for at least a decade now as a “solo artist” but with collaborators both live and in the studio. I have two full-length releases under my belt and a third coming out in March of 2011, Red Ship.

I’m still getting used to thinking of myself as a real drummer, so it’s exciting to have been invited to write this blog for MD! I’d been singing and playing melodic instruments for a long time prior to starting, so it didn’t come out of nowhere. Though I’m mostly self-taught, I did learn snare basics, paradiddles, etc. during my senior year of high school about twelve years ago. After the initial lessons I had at seventeen, I didn’t really touch drums again until ten years later, after the release of my second album in late 2007. After touring and obsessing over the release for some time, I got burnt out and hibernated for a little while. I took that break as an opportunity to finally pick up drums full force like I’d always wanted to, and having just moved in with my friend Jason and his wife, Linda, I had full access to Jason’s practice space and—his drumset! That, my friends, was how I began writing the songs that became Red Ship. Thank you, Jason!

Many different people and things inspired me. Cale Parks of Aloha, Katherina Bornefeld of the Ex, and Jaki Liebezeit of Can are just a few drummers I “studied” intensely. I tried to break down the beats to some of my favorite songs they played on, and either figured out the actual parts or a watered-down version of them. Sometimes it took me several practices to get them right, or until they at least sounded somewhat authentic. Once I got more comfortable, I started messing with them, moving beats and accents around to my liking, and just jammed by myself a lot. I also practiced those paradiddles I learned back in high school and applied them to all parts of the kit, not just on the snare. Armed with those tools, I played and played and played like a fiend. It became an obsession.

All the while, I was really getting into Arabic music and began studying Middle Eastern dance. Middle Eastern dance, more commonly known in the Western world as belly dance, often expresses the most common rhythmic patterns in the music, sometimes literally. There’s even a type of dance that is performed to drum solos in particular, where nearly every accent or hit is interpreted somehow in specific movements. That too became an obsession. Red Ship came about as I began to play these Middle Eastern beats on a typical five-piece trap kit. I wanted to apply the rhythms to rock music, taking them from the traditional tabla, dumbek, riqqs, and frame drums to a nastier, bolder setting. Many of the tracks on the album started out this way, and some evolved further to be in 5/4 or some form of 6/8. That’s what happened on the first single, “Mira: You’re Free With Me.” It started off as an 8/4 beledi beat but then I made it swing a little. The song grew from there as I layered guitar, vocals, and dumbek on top, with TJ Lipple (my engineer and co producer) on bass.

I’ve always admired artists that seek inspiration outside of their arena, because they augment their art in doing so. The typical “kick-snare-kick-kick-snare” 4/4 beat gets so old and boring, unless other parts of the song are compelling enough to make me wake up. Though I’m striving to progress technically, being able to keep an open and progressive artistic mind is always top priority, next to keeping the passion alive. Those two core values are my music-making tools of choice, with the rhythmic motive as a favorite secret weapon. And I’ve concluded that the drumkit may be the instrument I feel most at home with. I love my guitar, I love to sing, but nothing feels quite like beating the hell out of those drums from all sides and angles to make wondrous noise.
For more on Carol Bui, go to www.myspace.com/carolbui.