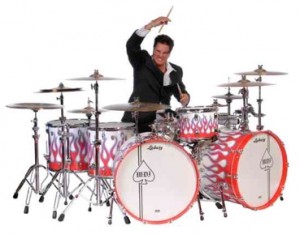 Hello, MD readers! My name is Steve Moore, aka “Drummer At The Wrong Gig.” A few years ago someone shot video of me and uploaded it to YouTube, where it sat idle until last week, when someone renamed it “This Drummer Is At The Wrong Gig.” In one week, it received over 3 million views!

When I was told that Billy Amendola from Modern Drummer was looking to get in touch with me and wanted to ask about my thoughts on this phenomenon, I was floored. It’s not every day that Modern Drummer sends you an email inquiring about your playing. In the past week I have given numerous interviews, but this one was especially important to me.

If you would indulge me, I would like to take a slightly different approach here for my blog. I don’t want to waste valuable time rehashing my bio for you, as it can be found on my Web site, listed below. Instead, I would like to share my thoughts on why I think this happened.

I feel that something very important has gotten lost over the years, and that is feeling. Now, I’m not referring to “the groove,” I’m talking about your emotions. I think something happened in the ’80s that damaged music: Players became faster and faster, and better technique was applied to achieve a desired tempo. Now, good technique is very important, please don’t misunderstand me on that. However, music changed from being an art form to a competition. People (myself included) became obsessed with analyzing technique. Is matched grip or traditional grip better? Is heel-up or heel-down better? It seemed like the guy with the best technique was now considered obviously “better.” But that’s not always the case.

People started forgetting about the sound. Then they started forgetting about how the sound makes you feel. Does the song calm you down, or does it get you going? I’m obviously referring to emotion. I honestly don’t think spinning and tossing my sticks has a thing to do with the video going viral. It’s the emotion behind it. There’s something on that video that grabs people. Some have a different reaction to it, but most people are amused by it in one way or another. It sort of wakes you up, and brings you out of your daily daze. What I’m saying is that they are able to “connect” with it. It makes them feel something—whatever that something is! LOL.

I’m not trying to impress anyone with my playing. Who am I to impress? I’m just a run-of-the-mill player. But I give everything I have on that video, and I think people appreciate that. They see a guy that is on top of the world when he is playing his drums. And that means something to them. I’m not fooling anyone! I’m just playing my drums and having the time of my life.

Just two days before the video went viral, I was on the phone with a very dear friend of mine, Chip Ritter. You may know of Chip through his DVD Stick Tricks. We were discussing how important it is to rise above the need to impress other drummers, and just “enjoy” the process of playing your drums. Music shouldn’t be about who is better. How can you possibly compare Jo Jones to Mike Portnoy? It’s apples and oranges. Both players are legends, period. Both of them did what was appropriate for their musical setting, and both of them used entirely different techniques. But to say they are both monsters is an understatement. I would say that almost every single person reading this could kick my tail as a drummer. But at the very least, this video is proof that if you enjoy your own playing, others will enjoy it as well.

Thank you so much for the opportunity to share some of my thoughts with you. And please feel free to reach out at any time with an email. I have several thousand in my inbox at the moment, so please try and be patient with me. I promise I will do my very best to get back to you as quickly as possible. Have a great day, everyone, and thanks for reading!
For more on Steve Moore, go to www.themaddrummer.com. And to watch the video that everyone is talking about, go here: www.youtube.com/watch?v=ItZyaOlrb7E&feature=player_embedded.