Though Barrett Deems was known as “the world’s fastest drummer”—resulting in his earning premier billing at Chicago’s Randolph Square in the 1940s and accolades from Gene Krupa and Buddy Rich—Deems’ effortless swing, solid time, and propulsive drive were the traits that enabled him to maintain a career over seven decades.

Deems was born in Springfield, Illinois, in 1914. By the age of fifteen he’d led his own bands and toured with violinist Paul Ash. His first big-time gig was with famed jazz violinist Joe Venuti, who he supported from 1937 to 1945, but he achieved his greatest acclaim as a member of Louis Armstrong’s All-Stars. Between 1953 and 1961, Deems played on classic albums such as Louis Armstrong Plays W.C. Handy and appeared in films like High Society—with Armstrong and Bing Crosby—and Satchmo The Great.

After leaving the All-Stars, Deems recorded and toured with Jack Teagarden and Mugsy Spanier, performed with Joe Kelly’s Gaslight Band, and made periodic appearances with The World’s Greatest Jazz Band. In 1976 Deems toured Europe with Benny Goodman, in ’81 he traveled to South America with Wild Bill Davison, and in ’86 he spent six weeks in Europe for the filming of The Wonderful World Of Louis Armstrong. In between his globetrotting, Deems accompanied an abundance of visiting artists throughout Chicago and continuously fronted his own bands, including the Barrett Deems 18-Piece Big Band. Deems performed until shortly before his death from pneumonia in 1998.

Drummer Blog: Jerod Boyd of Miss May I 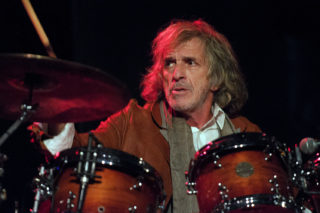 On The Beat with Corky Laing of Mountain: Shares Celebrations and Upcoming Projects