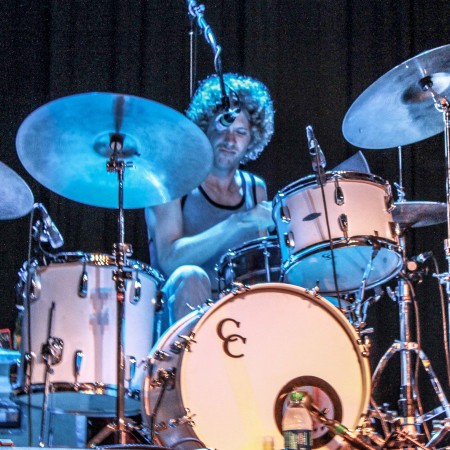 I started playing drums when I was about eleven. My first lessons were with a drummer named Stuart Johnson, who was collaborating with my brother in a band called Simon Dawes at the time. He got me started with some of the basics, and I spent a couple of years teaching myself. It was in that time that I developed my natural feel. I am under the impression that the circumstances in which a drummer is brought up dictate the key aspects of his playing. For instance, I have seen drummers that can sit at a pad and blow me away with their rudiments, but when they’re put on a kit they can hardly keep time. I think that my lack of technical ability as a young player drove me to drummers such as Al Jackson, Levon Helm, and John Bonham. All of my influences at the time were drummers who, despite their developed technique, focused on a deep backbeat. I now spend the majority of my days developing my technique, but any time that I play a show or do a session, I always consider feel and time to be the main priority.

I have been fortunate to grow up in a very musical household. My dad is a singer/songwriter and piano player. He sang for a couple of years in Tower of Power, so you can imagine the kind of music that I was raised on. Because of him I have grown up with some talented musicians that have given me a certain type of mentality towards playing. I was playing piano and singing long before I ever sat behind a drumkit, so I pride myself on the ability to play what the song calls for. In most groups that I have played with, especially Dawes, the song is always the main priority.

I am only nineteen years old, and I have so much to learn. I am currently taking some lessons with James Gadson, which has been quite an experience. Dawes is constantly working on new material and looking towards the future. Touring and being part of this band is the most incredible thing I have ever done in my life, however I am always looking to branch out and be a part of as much material as I can. I strive every day to be a better player, and the more that I learn and play, the more I realize that for me it is all about getting into the music and playing what is appropriate. I like to groove.

For more on Griffin Goldsmith, go to www.myspace.com/dawestheband.