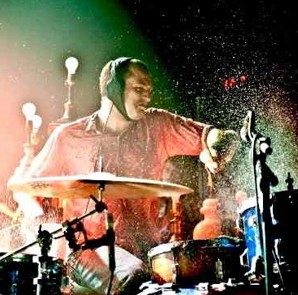 I don’t care so much about difficulty or technicality. I like style, passion, creativity, and all that kind of stuff. Here are some videos that always challenge and inspire me no matter how many times I watch them.

2. Yogi Horton. www.youtube.com/watch?v=jfx2GqvHeUQ. I never get tired of watching these clips. I’ve never seen this full video because it’s no longer being distributed (such a shame). But if ever I feel lazy before a show, I watch these two videos. “I’m talking about paying your rent and your old lady doesn’t have to be scared to have kids….” “Don’t come up in a joint sounding like you’re trying to do something, just be doing it!” What a character. Watching this video of Yogi reminds me that the way you think and talk, what you listen to, how you treat the people around you—all of this is connected to and influences how you play your instrument. It’s the same with…

4. Bill Ward. It never hurts to have an awesome mustache. It also never hurts to make every fill as nasty as possible. Black Sabbath performing “War Pigs” in France in 1970. www.youtube.com/watch?v=xtqy4DTHGqg.

5. Unknown Korean genius. Yes! It takes a lot of guts to be this happy. I love it.

6. I could go on…. There are tons of other names that I like to search for when I need a little pick me up—Elvin Jones, Max Roach, Art Blakey…. All of them seem to live by the same code: Look good, sound good.

7. People who don’t play drums. Check out this great interview with Miles Davis. The chasm of coolness between Miles and Bryant Gumbel in this interview is astounding. The answers Miles gives are relevant to all musicians.

Thanks for checking out my blog!

Darren King is currently on tour in support of Armistice, the band’s second studio album Teleprompt/Warner Bros. Records. MUTEMATH will also be releasing a live DVD later this year. For more, go to www.mutemath.com.