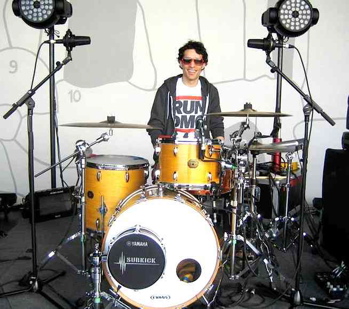 Feb 12, Northampton, MA
Hello, Modern Drummer readers! I just want ot say how honored I am to be able to write a blog for the Web site. I’ve been a longtime reader of the magazine and have been inspired and educated for many years!

Well, why don’t I introduce myself. My name is Johnny Andrews (aka Johnny 5). I hail from Victoria, BC, Canada. I do studio sessions and live playing for a bunch of bands. In the past I have worked with Holly McNarland, Starfield, Laura Smith, and dbClifford, but I’m probably best known for my work with Tegan And Sara. I have been with them for the last four years, doing all of their live shows.

So let’s get this blog started! Today was the first day of a three-week tour in the U.S. with Tegan And Sara. Things started out like normal, with setup and soundcheck. But today I was also fortunate to visit the Noble & Cooley drum factory. N&C artist rep Nick Jones came to the venue in Northhampton to pick me up and take me to the factory. (That’s Nick and me in the picture below, chillin’ at the venue.) We drove for about forty-five minutes through the city and then to the small town that is home to N&C. When we arrived at the factory, I felt like a kid in a candy store. I mean, how awesome is it to visit a place where they make drums—and not just any drums, amazing drums. Nick showed me how they make the drums and how they finish, paint, and assemble them. They put a lot of time and hard work into making some of the finest drums in the world. I had an amazing time and did not want to leave….but I had to get back to the venue to play a show!

The first show back on the road was a little shakey. I was nervous about remembering all the songs in our two-hour set, but I shook off the dust and jumped in! The show was a success and I look forward to playing more shows and getting back into musical shape with the band.

Feb 13, Boston, MA
Today started slow…getting over mild jet lag is always fun, especially in a dark bus where you can’t tell what time of day it is. So needless to say, I got up late.

Head to the hotel to shower…and watch a special acoustic performance with Tegan And Sara. For some reason an acoustic band performance means no drums…ha ha…but it was really great to watch the gang play while fans watched and radio listeners listened.

Soundcheck went off without a hitch. I took some time to hang with the opening bands and talk gear. I’m such a gear freak and pride myself on knowing everthing about everthing when it comes to drums—tuning, bearing edges, wood types…all that good stuff. It’s great to talk with other drummers to get new ideas or takes on the instrument I play. I’ve learned so much just from chatting with different drummers.

Feb 15, Brooklyn, NY
Today was an interesting day…a supportive, open-minded day. Early in the day I had a great chat with one of my all-time favorite drummers, Matt Chamberlain. I recently befriended him on Facebook, never thinking we’d ever talk, but I saw him online and mustered up the courage to say hi to one of my heroes. He actually responded! We chatted about drumming, of course. He enlightened me on different brands of drums, tunings, and vintage gear, and the fact that at the end of the day, “gear is gear.” It can be good or bad, depending how you play it and approach the music. It’s important to be inspired by the sound coming from your gear—but being musical is most important!

Today was also a special intimate T&S acoustic show—which means I had to be supportive and sensitive to the girls’ musical needs. In short it meant…playing percussion. I mostly played shakers and tambourines and the occasional floor tom hit. Interpreting the music in a different way is always a good challenge. It also let me have a chance to sit back and really check out the show. I’ve been playing in the band so long that I haven’t really taken time to do that very often.

Feb 16, Philadelphia, PA
Same as any other day—set up and play. But when things go wrong, what then? It’s great to have techs. Techs save the show sometimes. Today during the show my floor tom mic fell off. My stage tech/drum tech, Al Hannigan, came to the rescue. Apparently the clamp broke. The only thing Al could was to just sit there and hold the mic for the rest of the song while I slammed away at my drums, and then get a mic stand after the song ended. What a trooper! We gotta give credit and praise to all the people who work on the stage and put the show together. Without them the show would not go on—or it would take a lot longer to start the show!

Today was a lovely day. It was so nice to come to a warm city in the U.S.A. The sun was shining, people were smiling, and I had Jimmy Johns sandwiches for lunch! Then I showed up at the venue and saw how small and compact the stage was…. My drums were at the ramp/loading door for the stage—I was basically outside. Ha! And on top of that, we have two other openers that need room for their gear on stage! Once the rest of the stage was loaded in and set up, my tech set up my kit—blocking the loading door, sandwiched between many lights. I thought, “This is going to be a strange show.” But it turned out amazing—the audience was loud and the sound of the venue made my drums sound great—real rock ’n’ roll!

Thanks for taking time to read. Sometimes life on the road can be very exciting and sometimes really boring and ordinary. I hope that my writing gives some readers an idea of what life on the road is really like!