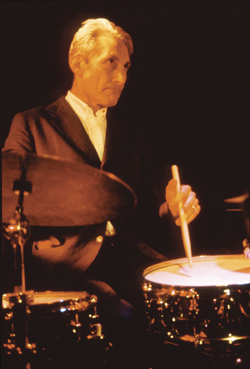 Charlie Watts was born on June 2, 1941, in Islington, London, England. In 1960, he was playing with a local band when he met blues musician Alexis Korner, who convinced him to join his band, Blues Incorporated. Later that same year, the band picked up lead singer Mick Jagger, as well as guitarists Brian Jones and Keith Richards. Soon after, Watts left the band, but in late 1962, three ex-members of Blues Incorporated (now calling themselves the Rolling Stones) persuaded the drummer to return. Watts kept his day job, though—until the band secured a long-term gig at the Crawdaddy Club. In January 1963 Charlie officially joined the group and devoted his life to music.

Watts remains a member of the Rolling Stones—the longest-lasting and most popular classic rock band in history—to this day. Although he made his name as one of the steadiest, most imitated drummers in rock, Charlie’s personal tastes lean toward jazz. In the late ’70s he joined fellow Stone Ian “Stu” Stewart in the retro boogie-woogie party band Rocket 88, which featured many of the UK’s top jazz, rock, and R&B musicians. In the 1980s, he toured worldwide with a big band that included such jazz/rock luminaries as Evan Parker, Courtney Pine, and Jack Bruce, who was also a member of Rocket 88. In 1991, Charlie organized a quintet tribute to Charlie Parker. A couple of years later, the Charlie Watts Quintet released Warm & Tender, which featured famed vocalist Bernard Fowler.

After their successful collaboration on the Rolling Stones’ Bridges To Babylon album, Charlie and Jim Keltner released a techno/instrumental album called simply The Charlie Watts/Jim Keltner Project, whose songs were named for Charlie’s favorite jazz drummers. Charlie’s latest solo outing, 2004’s Watts At Scott’s, was recorded with his Tentet at the famous Ronnie Scott’s jazz club in London.

In 1989, The Rolling Stones were inducted into The Rock And Roll Hall Of Fame, and in July of 2006 Charlie was voted into The Modern Drummer Hall Of Fame. Though Charlie’s personal life has always seemed substantially quieter than those of his band mates—his “best-dressed” image has been his main tabloid attraction over the years—in June 2004 it was widely reported that he was diagnosed with throat cancer, and underwent a course of radiotherapy. Thankfully the cancer has since gone into remission, and to this day Charlie continues to record and tour with the Stones—providing the timeless pulse to “the world’s greatest rock ’n’ roll band.”