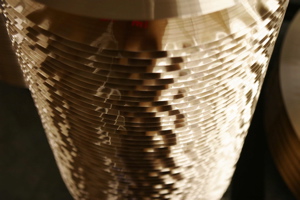 Paiste has more than a thousand artists who endorse the company’s products, ranging from industry icons to up-and-coming players. Here, a cool dozen give props to their cymbal maker of choice.

Ndugu Chancler (George Duke, Santana, Patrice Rushen)
“Toomas Paiste came to hear me play with Miles Davis in Switzerland back in the early 1970s. I had a Paiste cymbal on the kit. He invited me out to the factory, and we became good friends. We would lead each other in the development of new cymbal sounds. And once they find a sound that works, they don’t change that. The sounds are unique. Paiste cymbals are like a Lamborghini—not everybody has one, but when one passes by, eyes turn.”

Tommy Aldridge (Thin Lizzy, Whitesnake, Ozzy Osbourne)
“Five years ago I switched to Paiste. My motivation was to get the best-sounding cymbal possible. I go through a lot of cymbals, so I need consistency. I find a high level of consistency with Paiste. And they’re amazing people. The nicest people make the nicest instruments.”

Dean Butterworth (Good Charlotte, Morrissey)
“I met with Kelly and Erik Paiste [in the early ’90s], and what they promised is what they delivered. They were offering a chance to be with the company and have them promote and nurture my career. The relationship still keeps building. I get offers, but I don’t want to go anywhere else. Paiste has the best sound and the best relationship with their artists. I know they’re going to be there for me.”

Danny Carey (Tool)
“Paiste cymbals have the sound, the consistency, and the variety of models that I need. The family connection is the best with them. Whenever I need assistance, they are there for me 100 percent.”

Alex Gonzalez (Maná)
“All my idols when I started playing were Paiste artists. I couldn’t wait until I could afford my first set of Paiste cymbals. The way the company works is family oriented and friendly. They are right there no matter when you need them, from production to packing—the office workers too.”

Chaun Horton (Natasha Bedingfield, Macy Gray)
“I love the cymbal sounds. They are genuine: crisp, clean—perfect for me. Paistes are so consistent too. I worked at the Guitar Center in Rochester, New York, and met the Paiste rep. When I got the Macy Gray gig, then I met Andrew Shreve [artist relations, USA], Erik Paiste, and his wife, Kelly. I call her the first lady of cymbals. The relationship is like a family. We call and talk. I even know the family dog. That’s a big dog!”

Ryan Hoyle (Collective Soul, Paul Rodgers)
“I can tell Paiste cymbals on recordings. They jump out of the mix. Producers trust Paiste. I can put my Paistes up in the studio with confidence. And if I hear someone playing Paiste cymbals, I know that if I go to the store I can get that same sound. Kelly has created ‘the artist family vibe.’ There’s a real sense of family among Paiste artists.”

Paul Leim (Grand Ole Opry, Nashville session great)
“When I first got hired for the Grand Ole Opry, they had a deal with another cymbal company. After I had been there for a while, I took my Paiste cymbals in and put them up on the kit. The next week, I got called into the producer’s office about it. ‘Leave ’em up,’ he told me. And when I went on vacation for the summer of ’08, the sound engineer begged me to leave them on the kit, so I did!”

Dave McAfee (Toby Keith)
“When you come out to Los Angeles, a lot of the companies that you endorse want to meet with you. With Paiste, I actually want to go to dinner with them. They invite the whole band—whoever wants to come. Several of the band guys go with me, and we always enjoy a great evening. If I ever got cut from the endorsement list, I’d still play Paiste cymbals.”

Nicko McBrain (Iron Maiden)
“I actually endorsed Paiste before they knew about it! A distributor worked a deal with me, and later, when I contacted Paiste, I joined them formally. When you become a part of the family, you become part of the magic.”

Jason McGerr (Death Cab For Cutie)
“For an endorsement, it should be 50 percent people and 50 percent product. If that isn’t happening, I can’t work with the company. With Paiste, I get the people I need to talk to when I call, and they always come through for me. I can call them and say, ‘Pick out a new set of cymbals,’ and when I get them, they will fit together well on the kit.”

Rashid Williams (John Legend, Evolver)
“They believe in you as much as you believe in yourself. That’s what I look for in all my endorsements.”

Learn more about Paiste’s line of cymbals and gongs at paiste.com.