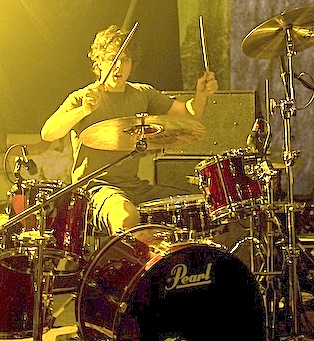 Hello, drummers, this is Greg Parrow, drummer with the band Transmit Now. I’m recently home from a several months on the road—always an incredible experience, but I’ll admit it’s quite nice to be back with friends and family for the holiday season! Besides, Christmastime is coming, and it’s my perfect excuse to blow tons of money on our favorite noise-making obsession!

During this last tour, Transmit Now played support for our close friends in the bands Framing Hanley and The Veer Union. These guys are all about having fun—on and off the stage! I want to tell a story, though, about the last night of tour. It was probably the most fun I’ve had playing music.

The guys in Framing Hanley were looking to settle the score from an incident that occurred about a month earlier that involved my band, eight stink bombs, and their tour bus. We sometimes play a cover of Katy Perry’s “I Kissed A Girl”, and during that particular song in our set, the Hanleys crashed the stage, wrapped Andy (our singer) to a stool with duct tape, and hired a large-bellied man dressed in one part Pink Gorilla Suit, other part banana hammock to give him a lap dance he’ll never forget. I guess they felt bad about it later, though, because they and some of the guys in Veer Union decided to come back and help me pack up my drums. I just wish they had waited for me to finish playing! I played on with a grin as my kit walked away from me piece by piece. By song’s end I was playing my best mandatory hi-hat solo ever!

But all fun things come to an end, and we’ll be seeing those guys again soon I’m sure. While I’m enjoying my time at home, the band is still quite busy with regional shows and promoting the upcoming release of our first full-length album, Downtown Merry-Go-Round, which I’m excited to say is coming out early 2010 on the Silent Majority Group record label.

It’s been one amazing ride so far, and I want to thank everyone from our management to our fans for making it so wonderful. I’d also like to give a quick special thanks to Pearl drums for their support this year. They’re a great company, and I absolutely love my drums. Be sure to hit me up on MySpace, Twitter, etc.—it’s always great to hear from other drummers!

Until next time, have fun MD’ers!