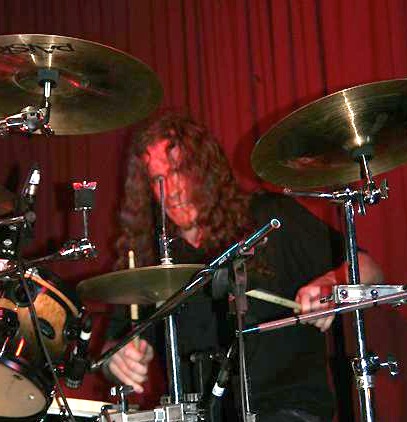 Hey there, everyone in MD Interwebs land! My name is Robin Stone, and I play in the Amenta. I’ve got something different to talk about: extreme metal drumming.

Whenever you turn on the radio or watch any pop/rock video, chances are the drumming is simple, mid-tempo, and takes a back seat in the song–which is exactly what the music calls for. But what happens if the polar opposite is created, where the drums are the forefront of the song, playing insanely complex patterns at mind-numbing speeds? That’s extreme metal drumming (or EMD).

Now, if you’re thinking of drummers along the lines of Joey Jordison or Dave Lombardo, think again. These guys, although fantastic drummers in their own right, do not represent extreme drumming. The real standout point of EMD is that it revolves around two main things: speed and endurance. I’m not talking about uncontrolled bashing as fast as possible; I mean precise, smooth playing in a musical context.

After every show I play, without fail there is always a bunch of people asking me, “How did you get so fast”? The answer is not so much practice as training. My usual day of drumming consists of two to three hours of “workouts.” I start with the metronome on 200 bpm and play a single-stroke roll for five minutes without stopping. Then I up the bpm by 10 every five minutes. I end up at 250 beats per minute, without stopping. The muscle ache in your legs after half an hour of playing 16ths at these speeds is quite intense. I then repeat the process with my hands.

Now I can hear you think, “How is this musical”? I ask you, what is “musical”? Where or how do you draw the line? If you were to break down any extreme music, you will find it’s all still built on the fundamental rules of music, just pushed to the limits.

In order to play EMD, you need to have a totally different mindset compared to “normal ” drummers, as you have to be willing to put yourself through hours and hours of mindless repetition, muscle cramps, tendonitis, and blisters. Oh, and the dreaded TICK TICK of the metronome. It’s a form of drumming that will turn you into your own drill sergeant.

It’s also slow process. If you keep up your training regimen, you can expect to wait five or so years before you really have some command over your limbs. Once you’ve made it through the half-decade of pain, you can reap the benefits. Show after show, you’ll have people trying to get backstage just to sit behind you and watch. The pure thrill of playing so fast is an absolute joy. There is nothing like it!

I didn’t start playing EMD straight away. I spent six or so years playing on a standard set with one kick drum, jamming away with classic ’60s bands such as Cream and the Beatles. I learned how to groove and play at standard tempos first. I had jazz lessons and loved it. It was only when I got my first double pedal that things changed.

In 2006 I joined the Amenta, and things got serious. After some Australian shows we went to Europe for a month or so, and toured through seven or eight countries, then did New Zealand, and now we’re heading out to the States and Canada for seven and a half weeks. I’m really looking forward to seeing America! As soon as we get back, it’s into the studio.