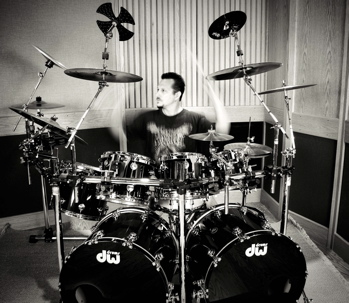 Hey there to all my Modern Drummer buddies! I grew up reading MD cover to cover and couldn’t wait for the next issue to come out, so I’m psyched to tell you what I’ve been up to through this MD portal (okay, blog).

It’s funny, because I don’t think of myself as a “drummer” as much as I do a “drummer in a band.” Other than a handful of greats who could mesmerize a crowd solely on their drumming skills alone (Buddy Rich will always be king!), I think of the drummer as a team player. It’s not just about playing drums, it’s about playing music.

I play in a prog rock band called Final Gravity. We’re a four-piece: drums, bass, guitar, and vocals. And that’s how we write. We all write. We just released our first CD, and all four of us contributed to the writing of the songs, not just our own individual parts. With certain songs, one guy might handle the bulk of the load, and on a few songs we all gathered round the cauldron and created together. That’s one of the things that make me most proud about playing in this band: We all equally create the music we play. I didn’t just write the drum parts. I also helped with the lyrics and the writing of the music too. In fact, on one of our songs, “Lab Rats,” our bassist, Charles, wrote the drum part. No, he can’t sit behind the kit and play a beat, but he came up with such an awesome drum part on his computer when demoing the song that I actually learned it note for note!

That’s something I want to point out to drummers who are starting to play in an original band for the first time. Don’t just feel obligated to play a straight beat behind an idea that the guitarist came up with and feel like a hostage to his riff. Work with the other guys in the band and try to create something together. See if you can take his idea to a new plateau. Guitarists don’t think like drummers, and vice versa. Maybe if you shift an accent here or there you’ll come up with something even cooler. If you have some neat drumbeat, show it to the other guys and see if it inspires them to come up with something new to play. And don’t resist suggestions from the other guys when it comes to altering your parts. Again, work together. It’s a really magical feeling when a song starts to come to life.

That’s another thing that I try to do when developing a drum part. I attempt to make each song unique. I mean, that’s the point, right? It’s called an original song. I like to think that anyone who knows our material could tell what song it is, even if all they heard were the drums. As a band we try to make each song stand on its own two feet. We don’t want our album to sound like thirteen versions of the same song. Well, that’s the way I think about the drums too. I don’t want all of my drumming ideas to be variations of the same beat. I want each drum part to contribute to creating a unique musical statement (i.e., song).

I think my drumming style is the result of an eclectic blend of influences. I was very lucky to have studied different styles of music with some great teachers. I definitely consider myself a rock drummer, but I learned jazz from Mr. Hickswa in high school in NJ, chart reading from Ray Marchica (of Broadway fame) in NY, Latin from Kim Plainfield at Drummers Collective in NY, and funk/fusion at Berklee College Of Music in Boston. Now, don’t get me wrong–I’m not ready to jam with Santana, but exposure to all of these other styles of drumming helped me develop a way to play rock music beyond just a straight-ahead beat. Not that there’s anything wrong with that, but having a larger palette of colors to pull from gives you the freedom and opportunity to paint a more interesting sonic picture.

I use DW maple drums. I play 8″, 10″, and 12″ toms, 14″ and 18″ suspended floor toms, and two 22″ kick drums. I’ve got a large variety of brands and sizes of cymbals and snares. I sneak in a few different colors of percussion also. I often change up the makeup of my kit just to keep it interesting.

I had a great time recording the drums for Final Gravity’s debut CD. I’m actually a recording engineer as well, so I got to record, mix, and co-produce a big chunk of our album. I own a commercial recording studio in Santa Monica, California, called Eargasm Studios www.eargasmstudios.com. In the studio I have just as much fun on either side of the glass, but when it comes to playing live, there’s nothing like banging on the skins! Check out my band’s site at www.finalgravityband.com or www.myspace.com/finalgravity to find out what gigs we have coming up. If you do make it out to a show, please find me and say hello. I always dig talking shop with my fellow modern drummers!