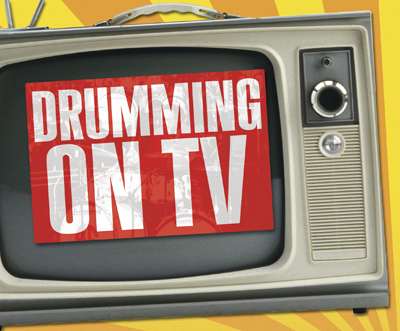 The December 2009 issue of Modern Drummer featured the story “Drumming On TV,” an insider’s look at the ins and outs of the unique craft of the contemporary television drummer. The article featured SNL’s Shawn Pelton, Letterman’s Anton Fig, Fallon’s Ahmir Thompson, and small-screen vet Nate Morton, as well as legendary Johnny Carson Tonight Show drummer Ed Shaughnessy, who manned that lofty throne in the ’60s, ’70s, and ’80s.

TV’s love affair with the drums actually goes back to at least the mid-’50s, when producers began to understand that the sophisticated swing of drummers like Art Blakey and Jo Jones could capture the imagination of viewers who might not ever make it out to a real jazz club to experience the music firsthand.

Of course, since the rise of cable TV, DVDs, and the Internet in the ’80s and ’90s, drumming fans have been able to see their favorite artists anytime, day or night, and in stunning hi-def/hi-fi quality. But back in the day, a chance to watch Buddy Rich or Keith Moon on network television was still something to rejoice over. So, in celebration of those great, sometimes groundbreaking drumming performances of TV’s golden age, we present to you highlights along the illustrious Drumming On TV timeline.

Jimmy Cobb with the Miles Davis Quartet and the Gil Evans Orchestra, The Robert Herridge Theater: The Sound Of Miles Davis, April 2, 1959, performing “The Duke,” “Blues For Pablo,” and “New Rhumba.”

Jake Hanna and the Woody Herman Big Band, The Ed Sullivan Show, March 24, 1963, on “Caledonia” and, later in show, “The Girl Upstairs” (with the Hugh Lambert Dancers).

Keith Moon and the Who, The Smothers Brothers Comedy Hour, September 16, 1967. Pre-show, Moon loaded one of his two bass drums with explosives. During the climax of “My Generation,” Moonie kicked the other bass drum, which set off the explosive charge, causing guitarist Pete Townshend’s hair to catch fire. Shattered cymbal shrapnel impaled Moon’s arm. Years later, Townshend blamed the explosion for his mounting hearing problems.

John Densmore and the Doors, The Ed Sullivan Show, September 17, 1967, performing “People Are Strange” and “Light My Fire.”

Mitch Mitchell and the Jimi Hendrix Experience, The Dick Cavett Show, September 9, 1969, performing a medley of “Machine Gun” and “Izabella.”

Levon Helm and the Band, The Ed Sullivan Show, November 2, 1969, performing “Up On Cripple Creek.”

Shelly Manne and the Jackson Five, Grammy Awards, March 2, 1973, with Manne playing call-and-response drums with the Jackson Five, performing a medley of the year’s hit songs, including War’s “Cisco Kid,” the Spinners’ “Could It Be I’m Falling In Love,” and the O’Jays’ “Love Train.”

Animal and Electric Mayhem, The Muppet Show, 1976-81. The wild-man puppet of the drums, played by Ronnie Verrell. Verrell, who died in 2002, played with the Ted Heath Orchestra, the Syd Lawrence Orchestra, and Jack Parnell’s ATV Orchestra, and on the TV variety show Sunday Night At The London Palladium.

Airto Moreira and Flora Purim, Midnight Special, July 29, 1977, performing “Nothing Will Be As It Was” and “Open Your Eyes You Can Fly.”