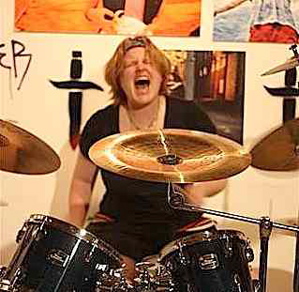 Hello, Modern Drummer! My name is Jenny Olivia Johnson, and I’m a drummer, composer, and music scholar currently living in Brookline, MA. I spent the past thirteen years living in New York City, and I only just recently came to Beantown to start an exciting new job as a professor of music composition and theory at Wellesley College, where I hope to inspire many other young ladies to write music, play music, think about music, and rock their hearts out. It’s an honor to be here!

I’ve had the pleasure of being involved with a variety of exciting projects over the past few years, most recently as a drummer for the amazing Brooklyn indie rock duo RENMINBI. I was actually RENMINBI’s original drummer between 2003 and 2005, a heady two-year period in which we recorded two EPs and played a multitude of exciting shows (including a California mini tour and the ALAF Festival in Dublin!). I was then lucky enough to be asked by RENMINBI to come on board again in early 2009 to record four new songs at the incredible Think Tank Studios, an intimate Hoboken wonderland that my favorite band in the world (Sonic Youth) calls home. The end result is what I believe is a truly outstanding EP: Surface, produced by Don Fleming and released digitally by CASH Music (www.cashmusic.org) this past July. Please check it out, download it for free, order it on vinyl or on a personalized iPod, and feel free to throw the band a virtual “tip” to show your support (http://renminbi.cashmusic.org/surface/)!

It was a unique and delicious challenge to translate the sounds imagined by guitarist Lisa Liu and keyboardist SMV to the drumkit. Many of our rehearsals consisted of breaking the songs into tiny four-bar or eight-bar segments and playing each segment over and over with a different groove, rhythmic pattern, subdivision, or combination of cymbals, not stopping until we were all completely satisfied. Over the four-month period of rehearsals, I acquired no less than three new cymbals (the shimmering 18″ Paiste Signature full crash, the haunting 18″ Paiste Signature thin China, and a pert little Sabian splash), fifteen new pairs of sticks in five different sizes (I finally settled on Vic Firth 2Bs), and two different sets of practice mutes, both of which I completely shredded by practicing two hours a day in the basement!

At that time, my only kit was the one I’d had since high school, and while it’s an excellent one (Tama Rockstar DX, bought in 1994), it was desperately in need of an overhaul. Luckily I was given the opportunity to record these new songs with Andrew W.K.’s monstrous five-piece kit, a 13″-14″-16″-24″ beauty that Don Fleming tuned to perfection. Working with Don and engineer Matt Azzarto was amazing for all kinds of other reasons–I’ve never met two people with more passion for microphones, fat and frantic drum sounds, and raw, pulsating noise. All I can say is, WOW!

RENMINBI is often lauded for having a shockingly huge sound, especially for a three-piece band, and I think part of the reason is that Lisa and SMV are often clamoring for individual guitar, keyboard, and drum parts that are at once intricate, complex, and gigantically loud. I’m right on board with this aesthetic, and I must say that I’m most proud of my part for the tune “Toulouse” (track two on “Surface”). It’s essentially a seven-minute, 16th-note-ridden, quarter-equals-160, boot-camp-style workout! The closest thing to a break that I have in that song is around 4:36, when I play a relatively transparent and whispery six-bar set of 16ths on the small crash and ride cymbals.

But hey, I wouldn’t have it any other way–to me drums are all about blood, sweat, tears, pushing life to the limit, and making your ineffable emotions sing and scream. Over the past six years that I have known and worked with Lisa and SMV, they have never stopped pushing me to try new things, discover new timbres, and reach new heights of amplitude, complexity, and intensity. I can’t thank them enough!

My other recent projects have included playing percussion, keyboards, and noise in an improvising electroacoustic duo known as Winter Company, with composer/sound artist Paula Matthusen. Paula and I go way back–we were both composition students at the Aspen Music Festival in 1997, and since that time we’ve worked together as fellow graduate students at NYU, as fellow composers at a festival in the Netherlands, and now as improvising artists in WC.

When I perform with Paula, my percussive techniques are not dissimilar to when I play with RENMINBI–if anything, I find myself letting go even more, breaking more sticks, smashing things with even greater force, and giving in even more fully to the raw intensity of the moment. In RENMINBI, every stroke is accounted for–it’s been practiced over and over, considered and reconsidered, made sacred. For me, this kind of playing is intensely spiritual, a ritual of giving oneself over completely to the composition–I’m executing something that already exists, and my job is to ensure that it sounds as beautiful as it is in the composer’s imagination.

When I play with Paula in Winter Company, by contrast, I find myself immersed in an entirely different kind of musical spirituality, one that is much more focused on my own movements and emotions and is much more dependent upon my own compositional proclivities. The musical decisions I find myself making in the middle of an improvisation are often completely determined by the mood and vibe in the room, the people listening, the sounds that Paula is making, and what those sounds make me think about or feel. Sometimes Paula’s laptop will shimmer with high, sparkly pulsations, and I’ll quickly think, A beefy stroke on my heavy Tibetan bowl, or a searing riptide of 32nd notes on my cymbals?

These kinds of decisions–happening at lightning speed, by the way–are less about forethought and rehearsed execution than they are about tuning in to the moment and being absolutely present, utterly open to any musical possibility. I feel really lucky to be able to perform frequently in both contexts, each of which feeds off the other and in turn feeds me as an artist.

As a composer, I tend to favor writing similarly loud and intense pieces, often on dramatic subjects and involving operatic voices and amplified chamber ensembles. My music has been performed by such amazing groups as the New York City Opera, ICE, Alarm Will Sound, and the Netherlands-based Asko-Schoenberg Ensemble, and it has also been featured at the Bang On A Can Summer Music Festival and the Gaudeamus New Music Week in Amsterdam. I haven’t performed my own “composed” music on drums or percussion in a long time, but that will be changing very soon. Please watch my Web site for details (www.jennyoliviajohnson.com)!

In the meantime, I’d love to invite all of you to check out the existing works on my site, most of which were composed over the past five years and performed by some truly wonderful players. Feel free to make public comments, email me with questions, or share the sounds with friends! And keep checking back–many cool projects are in the works for the near future.

Thanks so much for hearing me out, MD! Keep it real, and keep it cathartic.